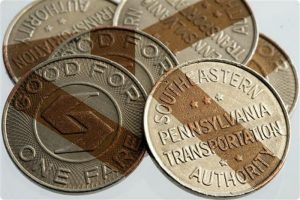 The end of the year comes with a lot of endings. This year will mark the beginning of the end for the last major metropolitan area still using transportation tokens.

Just before Christmas, the Southeast Pennsylvania Transportation Authority (SEPTA), the transit agency serving the Philadelphia metropolitan region, announced that they are removing the token vending machines at El (elevated rail stations) and subway stops. The announcement said that they will continue to sell tokens at some stations and the system will continue to accept them.

SEPTA has seen a 1 million token decline in sales just in the last year as people opt to use a SEPTA Key Card and daily QuickTrip passes. It is a trend experienced nationwide. It is the result of better use of electronic payment systems and the increased cost of handling tokens. The cost of credit card swipe fees is less expensive than the physical handling of metal disks.

Farecard technology has been around for a while. I first encountered it in the early 1990s during a trip to Washington, D.C. The Washington Metro began using fare cards as a pilot in 1989 and rolled them out system-wide in 1990. My hometown of New York launched the MetroCard in 1993 and stopped using tokens in 2003.

One of the benefits of the fare cards to the transit agencies is that they can charge differing rates for different situations. Peak fares can cost more than the non-peak while using an express service can be charged an additional fare without having to carry extra tokens. The Washington Metro not only changes fares between peak and off-peak times but charges a different fare based on distance.

Be prepared Philadelphia, the days of the single fare ride for a token is almost over.

CAIRO, Dec. 24 (Xinhua) — Egyptian security at the Cairo International Airport has thwarted an attempt to smuggle 329 ancient coins to France, the Ministry of Antiquities said on Sunday. The coins, seized from an Egyptian passenger travelling to France, date back to the Byzantine and Ptolemy eras, the ministry said in a statement.

The Currency Museum shows how diverse our units of commerce have been THE BANK of Japan’s Currency Museum in Tokyo exhibits mainly currencies that have been circulated in Japan, including fuhonsen coins said to be the first ever used in this country, toraisen coins imported from China during the medieval period, and oban and koban (large and small gold coins).

800-year-old coin minted by Henry III but then scrapped when blundering officials realised it was worth more as gold than its face value is expected to make £500,000 at auction

The first ever English gold coin that had to be scrapped after a banking blunder meant is was worth less than its weight in gold, is now tipped to sell for £500,000. Some 52,000 of the King Henry III gold pennies were struck nearly 800 years ago before it was realised they were too heavy.

Eulogy for the SEPTA token

A typewriter clacking. A droning busy signal on a landline.

BACOLOD CITY— The Bangko Sentral ng Pilipinas (BSP) urged consumers in Negros Occidental to thoroughly check the features of the new PHP5 coins already circulating in the province. “We urge Negrenses to check the features, mainly the appearance of the coins they have, to ensure that they spend the right amount,” said Job Nepomuceno, deputy director of BSP-Bacolod.

Chinese Businessman Buys BMW With $11k Down Payment – In Coins

That's a lot of pocket change. We’ve all done it at some point. Yes, all of us.

THERE are fears fake pound coins are flooding into circulation.