One of the more interesting news items is that the Royal Canadian Mint is suing the Royal Australian Mint. 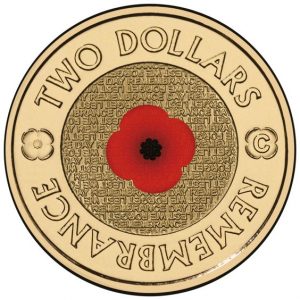 The Royal Canadian Mint alleges the Royal Australian Mint infringed on its patents when creating the 2012 Remembrance Day $2 coin.

Reports state that the two sides have tried to discuss the matter over the last two years. When no agreement had been reached, the Royal Canadian Mint decided to sue for relief. The Royal Canadian Mint is demanding that Australia hand over all 500,000 of the Remembrance Day coins struck or “destroyed under supervision.”

Striking Back Against Breast Cancer: One Coin at a Time

“At a time when our national debt is over $20 trillion, it is more and more difficult to find money for important things like cancer research,” – Congresswoman Carolyn Maloney.

Online dealer sold 30kg of gold Tuesday, worth more than $1m Bitcoin tumbles below $10,000 for first time since December Amid the wild Bitcoin ride that’s wiped more than 40 percent off the cryptocurrency’s price in a month, a pattern may be emerging: sellers are switching out of digital gold and into the real thing.

Gold’s liquidity and stability have made it an attractive option for investors in recent years. There are many ways to invest in gold. Investopedia lists gold futures, investing in old companies, gold EFTs, gold mutual funds, gold bullion, gold jewelry, and, of course, gold coins.

After more than a year, visitors to the Nevada State Museum can watch the museum's historic Coin Press No. 1 carry on a mission it started nearly 150 year ago in the same building. The venerable press — which churned out millions of dollars in silver and gold coins during stints at U.S.

OTTAWA — The Royal Canadian Mint is suing its Australian counterpart over the way it prints red poppies on its commemorative Remembrance Day coins. Documents filed in Australia’s Federal Court in December allege The Royal Australian Mint used without permission a printing method patented by the Canadian mint — which is now demanding that Australia’s 500,000 commemorative $2 coins, in circulation since 2012, either be turned over to them or “destroy(ed) under supervision.”