POLL: What do you think about Presidential Silver Medals 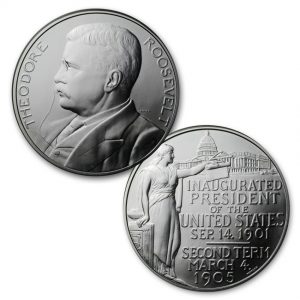 Silver Medal from the 2013 Theodore Roosevelt Coins and Chronicles Set

A few weeks ago, the U.S. Mint announced to the Citizens Coinage Advisory Committee that they would be producing silver medals based on the design of previous presidential medals. These medals would be struck using the same .999 silver planchets that are used for the American Silver Eagle coins.

The U.S. Mint thinks that the silver medals would be a popular seller since silver coinage sells well. Using existing designs, the U.S. Mint hopes to be able to save time and money by removing the process of creating new images and not having to undergo the onerous review process of the CCAC and the U.S. Commission of Fine Arts.

I think the U.S. Mint is missing a point. Collecting commemorative silver and American Silver Eagle coins have the cache of being legal tender coins.

Although there are some very dedicated collectors of medals and other exonumia, the vast majority numismatics collectors are collecting legal tender coins.

If you look at the offering of some of the most prolific world mints like the Royal Canadian Mint, New Zealand Mint, and the Perth Mint, they offer a wide variety of offerings as legal tender coins. Countries like Niue and Somalia contract with other world mints to produce non-circulating legal tender (NCLT) coins to sell to the public.

People are drawn to the concept of collecting and/or investing in real money.

Medals are not money.

Although it sounds like a harsh assessment of the concept, the only downside that can be foreseen is if the U.S. Mint faces a planchet shortage like it did in 2009. Otherwise, I am not sure it will sell like I think the U.S. Mint is portraying.