When news comes out of the United Kingdom it is fun to read how the British tabloids write about them. They have a way with their words that make no doubt about where they stand. 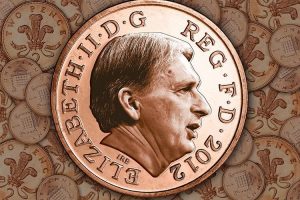 This past week, the tabloids had their fun poking at Philip Hammond, Chancellor of the Exchequer, who suggested that the country no longer produce 1p and 2p coins. He also questioned whether it was to the country’s advantage to eliminate the £50 note.

During Hammond’s review of the treasury, he said that since 500 million 1p and 2p coins fall out of circulation every year that it might be a good idea to eliminate them.

Hammond is a member of the Conservative Party. Following his statements on the State of the Treasury, MP (Member of Parliament) Wes Streeting, a member of the Labour Party, referred to Hammond as “this penny pincher Chancellor.”

That opened the tabloids and other opposition parties to attack Hammond and the Tories. Much like the argument against eliminating the one-cent coin in the United States, those against removing those coins worry about squeezing the poor a few pennies at a time (allegedly) making their situation worse.

For the £50 note, Hammond cites studies about its use in organized crime for physical payments. However, studies show that the criminals are more apt to use the 500€ note, while it is still in circulation, the 100&euro note, and the $100 Federal Reserve Note. Even with the strong exchange rate being strong on the pound sterling, it is more advantageous for criminals to use higher denomination banknotes.

Prime Minister Theresa May, who has the final say, gave the British press a non-committal statement following the opposition attack. Of course, that opened her up to being called whishy-washy by the tabloids.

The British tabloids do make the news entertaining!

And not the news…

Whether a modern quarter displaying a U.S. national park or a rare, hand-hammered Greek denarius dating back to 250 A.D., history is woven throughout the process and story of all coins, tokens and currencies, according to Monte Mensing, president of the Springfield Coin Club.

GAYLORD — When Kandus Schalter received a “challenge coin” from Matt Barresi, director of the Gaylord Regional Airport, she thought she might just keep it in her wallet. But Frank Jasinski thought Schalter, a World War II veteran and local businesswoman with strong ties to the community, should be able to wear it proudly, so he offered to take it to Hogan’s Jewelers, to put a hole and catch in it.

On Monday, March 12, the National Bank of Ukraine introduces a commemorative coin "The Day of the Ukrainian Volunteer". This was reported by the press service of the bank. The nominal value of the coin is 10 UAH, metal is a zinc-based alloy, the circulation is 1 million pieces.

Future of 1p and 2p coins questioned by Treasury

The Treasury could be paving the way for the end of 1p and 2p coins as it seeks views on the future of cash. It is inviting comments on the mix of coins in circulation as consumers move to non-cash payments such as contactless and digital spending.

PHILIP Hammond was branded a “penny-pincher” after revealing shock plans to scrap 1p and 2p coins. Unveiling his Spring Statement, the Chancellor resurrected proposals to abolish the “obsolete” copper change.

A pot of 500 gold and silver coins dating to the 15th century was discovered in the Netherlands.

The five dollar gold coin is the first time the Mint has ever issued currency in a pink hue.

Utility workers in the Netherlands struck gold while laying drain pipe at a construction site earlier this month. The employees of Oasen, a water supply company, unearthed a collection of nearly 500 coins in a glazed cooking pot dating back to the 15th century, the NL Times reported — 12 of them gold and the remaining silver.