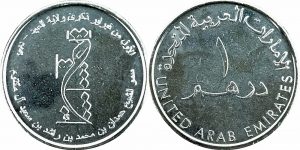 Earlier this month, The National, a site that carries news for the United Arab Emirates, published a story about a 17-year-old numismatist collecting UAE 1 Dirham (Dh1) coins.

In the original article, Nihad Hassan, an Indian living in the Abu Dhabi, liked the design of the Dh1 coins and started collecting them. One coin that was difficult to find was the 2015 Dh1 coin issued to celebrate the seventh anniversary of the accession of Sheikh Hamdan bin Mohammed as Crown Prince of Dubai. As part of the article, he asked if someone could help him find a coin.

This past week, The National reported that an Indian working in a local grocery store found the coin and gave it to Hassan.

The original report was seen around the country and helped gain attention. Hassan reported that he received many emails offering to sell the coin to others who wanted to just give the young numismatist the coin in order to encourage him and his hobby.

Could this be a lesson to encourage more people to look at their coins, especially here in the United States? What if more media outlets wrote about young collectors and allowed members of the public to donate the coins to help these budding collectors complete their collection? Could hobby shops of all types that buy from the public use their space to create collections of state or national park quarters that will be given to younger children to learn about collecting? What if the store created a credit system whereby you bring the coins and you get a store credit?

It would be a form of community collecting. Maybe the collections could be auctioned for charity. Something for those in business to think about.

A young numismatist in search of a rare coin has had the elusive bit donated to his collection after members of the community heard his story and rallied around to help. Nihad Hassan had been searching for the Dh1 coin that was issued in 2015 on the seventh anniversary of the accession of Sheikh Hamdan bin Mohammed as Crown Prince of Dubai.

Prince Charles is getting a special £5 coin made to celebrate his 70th birthday. The Queen has also ordered a £25 platinum coin to commemorate the special occasion. The prince has already had special currency made for his first wedding and 50th and 60th birthdays so it doesn’t come as a huge surprise he’s getting more.

With the future of 1p and 2p coins under scrutiny, is your small change worth a fortune?

The government has ruled out scrapping 1p and 2p coins, despite launching a consultation into the use of cash. And if you’re among the 60% of people who immediately save, lose or even throw out pennies you receive, think again – these small coins can be worth more than you think.

In 2007 Alexander Shapovalov suggested an unusual coin-weighing problem for the sixth international Kolmogorov math tournament [5]. A judge is presented with 80 coins that all look the same, knowing that there are either two or three fake coins among them.

$1,000 reward for whoever can craft commemorative coin of Sgt. Henry Johnson

A contest is now underway honoring one of the Capital Region’s greatest war heroes. Ferris Coin Company in Albany announced they’re handing out two $1,000 prizes for whoever can design the best commemorative coin for the late Sergeant Henry Johnson, who served in World War I.

Much of the information in this article is from "The Mint on Carson Street," by Rusty Goe. Whenever I take people on tours through the Nevada State Museum, one of my favorite exhibits is the original coin press and the nearly complete collection of gold and silver Carson City coins minted there.

The United States Mint recently released a new limited edition coin under its Breast Cancer Awareness Commemorative Coin Program to increase awareness of breast cancer and raise funds for research, according to a press release.

Video It could be a story line straight out of the hit television series Detectorists. But instead of Mackenzie Crook and Toby Jones in the leading roles, the stars of this show are Norwich residents Damon Pye and his wife Denise.

A 1787 New York Brasher Doubloon, one of the first gold coins to be struck in the United States, has been sold for more than $5 million (£3.