I apologize for being a day late. 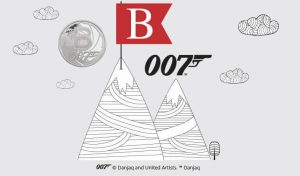 Interesting numismatic-related news out of the week is coming out of the United Kingdom. The Royal Mint has introduced 26 special 10 pence coins, with each reverse having a letter of the alphabet and an image representing that letter. For example, the 10p coin with “A” honors the Angel of the North landmark in Gateshead and “B” for “Bond… James Bond.”

All 26 coins have been added to circulation and the Royal Mint is promoting the coins with the hashtag #coinhunt on social media.

For those collecting the coins, the Royal Mint is offering a special album and an app that can be used in the hunt. For those of us outside of the United Kingdom, you can purchase the coins online on the Royal Mint’s website.

It is an interesting idea that could translate to the United States. Let’s see what happens before making that proposal.

A new exhibition at the National Hellenic Museum which will open March 4, will feature the story of coins from early use in ancient Greece to today. Titled “Change: The Story of Coins”, the exhibition will include an interactive display which will highlight how coins are important financial, cultural and political tools.

The National Bank of Poland has issued a special coin commemorating a hero of the Polish struggle for independence. General August Emil Fieldorf (nom de guerre “Nil”), a hero of the Polish-Bolshevik War of 1920 and of World War II, was arrested by the communist authorities in 1950.

Sixty two year-old amateur metal detector Richard Patterson found a rare coin from the third century in a field in Winchester, Hampshire. It has now sold at auction for £10,000 ($14,000).

OPINION: What is a 'Challenge Coin?'

Recently, at the monthly Veterans Coffee held at the Gaylord Regional Airport, I presented a World War II veteran with our airport Challenge Coin. A guest at the event approached

Queuing, cricket and tea represent what it means to be British, according to the Royal Mint, which has launched a new collection of 10 pence coins to showcase the &amp;quot;A to Z of what makes Britain great&amp;quot;.