The Royal Canadian Mint has officially Jumped the Shark! 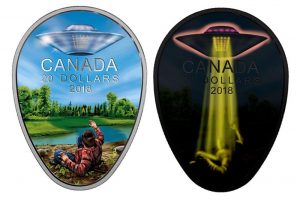 According to the Urban Dictionary, jump the shark is “a term to describe a moment when something that was once great has reached a point where it will now decline in quality and popularity.” The origin came from the premiere of the fifth season (1977) of the sitcom Happy Days in which The Fonz, the stereotypical 1950s greaser, jumps over a shark on water-skis. It was out of character for The Fonz and seen as a ploy to boost sagging ratings.

Popular usage has been those times when a show, company, or anyone does something so outlandish to attract attention that was once lost.

One might say that the Royal Canadian Mint might have jumped the shark in the past, but they have really outdone themselves this time. They issued a one-ounce silver, $20 face-value non-circulating legal tender (NCLT) coin to commemorate an alleged UFO sighting.

Aside from being 6.22-times the spot price of silver, the design is printed on the egg-shaped planchet. There appears to be nothing about the coin that is struck.

I have heard some say that things the U.S. Mint is doing is bad for the hobby. Some have targeted the American Liberty 22th Anniversary Gold Coin as being over the top. Although I have a problem with the coins having a high premium over spot prices, the coin pales in comparison to the UFO and other lenticular coins being offered by the Royal Canadian Mint.

The rare discovery of 1,500-year-old bronze coins in a Greek harbor is puzzling scientists

Scientists are left wondering how the coins remained hidden for so long.

A Long Island businessman who built a textile empire by peddling irregular sweaters at local flea markets thought he had a fool-proof way to boost his assets — invest in a pal’s coin business. Bad …

The oval-shaped coin immortalizes Stefan Michalak’s experience in Whiteshell Provincial Park, more than 50 years ago in what became known as the Falcon Lake incident.

The Royal Canadian Mint has released a new $20 coin to commemorate one of Canada's closest encounters with a UFO.

Now that the nation has a $1.3 trillion budget, lawmakers can resume debate about whether to pinch pennies. The threat to do away with pennies and nickels

A trove of bronze coins, the last remnants of an ancient Jewish revolt against the Roman Empire, have been discovered near the Temple Mount in Jerusalem.

800-year-old coins dug up by detectorists near Oswestry

Medieval coins dating back 800 years have been unearthed in north Shropshire.