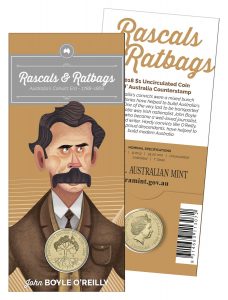 Here is a way to acknowledge your history and have some fun with it as well.

After the British discovery of Australia in 1770, they initially settled the colony of New South Whales by exiling criminals to the area. Although there were free colonies in Australia, it became known as Britain’s penal colony. Rather than bemoan their sketchy past, especially since they have moved on to become a successful nation, the Royal Australian Mint seems to have embraced their history to have a little fun and promote coins.

Using its yearly roadshow, the Royal Australian Mint kicked off its Rascals and Ratbags Roadshow Reveal at the Mint in the capital city of Canberra to introduced the Rascals and Ratbags coins. These coins celebrate the 230th Anniversary of the arrival of the First Fleet on the island nation and the 150th anniversary of the Hougoumont, the last ship to carry convicts to Australia.

The coin is available in Australia as a four-coin uncirculated mintmark and privy mark set, a $1 (AUD) silver proof with the “C” (Canberra) mintmark, and a one-tenth ounce $10 (AUD) gold proof coin also with the “C” mintmark. 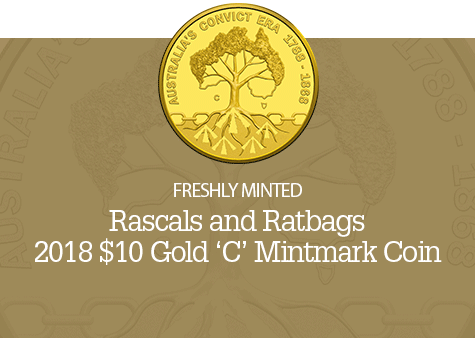 Since these are not colored coins they will not be a subject of their lawsuit with the Royal Canadian Mint.

As part of the celebration, the Royal Australian Mint is traveling with a portable press to allow visitors to strike a special Australia counterstamp in their coins.

It goes to show that rather than dwell on your past problems, fix them and move on. Have a little fun at your own expense. It is certainly better than the arguing that pervades the United States.

This S.F. Fortress Is Full of Money That Will Never Be Spent

The Artist as Alchemist — Turning Coins Into Precious Art

On March 6, Ghana’s Independence Day, artist Yaw Owusu was crouched on his living room floor, putting the finishing touches on a new piece. Stretching over most of the floor, the work sparked silver and copper as the sun bounced off the carpet of pesewa coins — the country’s least valuable currency and Owusu’s preferred medium.

Do you still have old Irish coins? $270.4m worth is unaccounted for

Break out those piggy banks – if you can get your hands on some old Irish punt, you've basically won the lotto. According to The Central Bank's annual report, $270.4 million (€226m) worth of old Irish punts remains unaccounted for.

The Tokyo Metropolitan Police Department has arrested a man on suspicion of selling counterfeit 2020 Tokyo Olympic and Paralympic commemorative coins. Yasuhiro Kotani, 43, was arrested for allegedly violating the trademark law by possessing the imitations in order to sell them.

Venkatesh Kandula believes in tracing history through coins. The numismatist from Tuni has around 1,800 coins in his kitty, some that are historical rarities. On World Museum Day, Kandula displayed his treasure trove of rare coin collections at Visakha Museum on Friday.

OUT OF CIRCULATION SOON These are some of the “Flora and Fauna” and “Pilipino” coin series to be demonitized. The Bangko Sentral ng Pilipinas (BSP) announced on Friday the start of the demonetization process