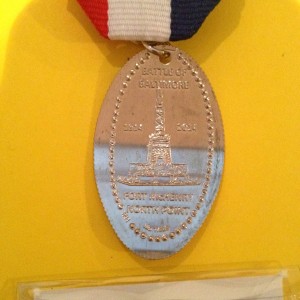 Sometimes, we forget that there is more to numismatics than coins and currency. While collecting Morgan dollar VAM varieties may be rewarding, there are opportunities just to have a little fun.

This is where our article feature article, “Pressing Memories: Pursuing elongated coins won’t break the bank,” in Antique Trader is appropriate. It tells the story about the origin or elongated coins and the current market for these coins.

One way to consider collecting elongated coins is to collect them based on where you have been. While some people will buy postcards or lapel pins to collect as souvenirs, elongated coins can be less expensive and have even more variety than gift shop fare.

You can find the machines with the cranks that will create elongated coins in a lot of museums, theme parks, and even in on the Disney properties. Most machines charge 51-cents to $1.01 to squish and imprint a design on the one-cent coin you pay for the service. Almost all of the machines are mechanical where you do the work. They also will only elongate cents. There are a few machines that are more automated that can elongate almost any coin.

Having played around with a few of these machines, the best coin to use is one of the copper-plated zinc cents (post-1982) that is red-brown in color with more red than brown. Very shiny coins look too artificial and the design seems to get lost on brown cents. One of the reasons not to use the all-copper cents is that the rich brown that makes those cents attractive does not look as good when squished.

If you start to collect elongated coins you may consider joining The Elongated Collectors (TEC) organization. Considering that elongated coins are fun collectibles, TEC has to be a fun group. Join in and have fun!

By Karen Knapstein You don’t need to have an interest in coin collecting to get started in coin collecting. If you are a traveler, a fun-seeker, a keeper of mementos from family outings or historical events, creating and collecting elongated pennies may be a good fit for you.

Man picks up coins off the ground, saves an astounding $84,000

Before you tell me I am cuckoo, allow me to introduce Ian Watt. The 70-year-old from the United Kingdom has made the enormous amount of money in a very peculiar way. Mr Watt’s fortune has come from him never walking past a coin on the ground, with the eagle-eyed dad collecting almost a million of lost coins in his travels.

Patna: The Reserve Bank of India (RBI), in view of the coin glut in Bihar, said on Monday that the central government was encouraging use of coins, and it was receiving two to four truckloads of coins daily in Patna to be distributed across the state through banks.

RCM Gold Coin Sales Down 50% In Q1, In Line With Global Trend

The Singapore Mint has released a limited-edition set of medallions to commemorate the historic first summit between a sitting U.S. president, Donald Trump, and a North Korean leader, Kim Jong Un, scheduled in the island state for June 12.

Exploration company Golden Predator plans to start selling the coins — about $1,800 for a one-ounce coin — later this month.