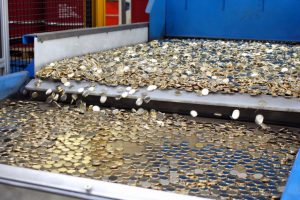 Two dollar coins on the way to be stamped at the Royal Australian Mint
(Image courtesy of ABC Canberra: Louise Maher)

On June 20, 1988, the Royal Australian Mint replaced its two dollar currency note with a coin. This year, they are celebrating the coin’s 30th anniversary. It was introduced four years after replacing the dollar paper note with a coin (1984).

Similarly, the Royal Mint introduced the one-pound coin in 1983 and the Bank of England stopped issuing one-pound currency in 1984.

The Royal Canadian Mint introduced the dollar coin, nicknamed the Loonie, in 1987 while the Bank of Canda ceased issuing the paper dollar.

The euro entered began circulating as a continental currency beginning in January 2002. When it was introduced, they issued one- and two-euro coins and the lowest denomination paper currency was the 5 euro note.

Of the Top Ten, only the United States and China issue their unit currency as paper. However, because of economic controls and exchange rate, most of the Chinese economy is based on the Renminbi (the People’s Money). Small change is popular in urban areas and paper is more common in rural areas.

But the Chinese economy is heavily regulated within the country. Of the Top 20 economies identified by the International Monetary Fund, only the United States and China issues its unit currency as paper notes. Most countries issue a note of two of their base units and many are considering replacing their five unit note with a coin.

Yet the United States, the country with the largest economy on earth, the one that people say should be the leader lags behind every country except China by producing a one dollar paper note.

The lack of paper currency has not hurt these other economies. In fact, it helps because coins last longer than paper currency. Also, it is better for the government because, for every one-dollar coin produced, the government makes 68-cents in seignorage (with the dollar coins costing an estimated 32-cents each to produce).

Replacing paper mone with the coin does not seem to have hurt other economies, yet the issue raises the ire of some who wants to call this a conspiracy against the people. It makes economic sense to move in this direction and should we not be all in favor of doing things in our own economic benefit?

The durability of the $2 coin means it could be around for decades to come, despite Australia’s shift towards a cashless society.

Sofia. 34,000 fake coins were found in the home of the main member of a criminal group involved in counterfeit money making and distribution, prosecutor Nikolay Dimitrov said during a briefing.

Meet the mastermind behind these incredible rings made from coins

A sterling effort in more ways than one.

A graduate of Glenwood High School in Chatham designed Illinois’ bicentennial coin, which is available for preorder for $45 on the state treasurer’s website.

Residents in Puerto Rico were left without power for months after Hurricane Maria pummeled Puerto Rico, and experts estimate that around 4,640 people died. But the Environmental Protection Agency thinks it did an A-plus job responding to the disaster.

On this day in 1775, the Second Continental Congress issued $2 million in bills of credit.

The National Bank of Ukraine (NBU) and Crane Currency on June 22 signed the Agreement of Cooperation in the field of currency production, the central bank’s press service reports.

Trump Leaves His Mark on a Presidential Keepsake

Under President Trump, once stately medallions have gotten glitzier, and at least one featured a Trump property. Ethics watchdogs are worried.