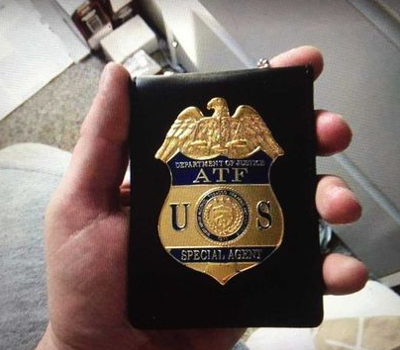 Image of fake ATF badge Jonathan A. Kirschner used to lure his victims. On June 25 Kirchner pleaded guilty to impersonating an ATF agent and selling and importing counterfeit coins and precious metals bars.

This week’s most disturbing story was that a New Jersey man was arrested selling counterfeit gold coins and bars while posing as an officer for the Bureau of Alcohol, Tobacco, Firearms, and Explosives (ATF).

Jonathan A. Kirschner, 34, of Moorestown, NJ, pleaded guilty to impersonating an ATF agent and unlawfully importing counterfeit coins and bullion into the United States.

Kirschner, who used the alias “Jonathan Kratcher,” sold fake gold bars to a collector for $11,000 in cash. When the collector brought them to a dealer it was determined they were fakes. The dealer reported the incident to Industry Council for Tangible Assets Anti-Counterfeiting Task Force (ICTA ACTF) who reported it to federal law enforcement.

After being caught, Kirschner admitted to also selling 59 fake Morgan dollars and importing the bogus coins and bullion from other countries, including China.

Even though Kirschner had a badge that looked real, it is likely that he did not have a Personal Identity Verification (PIV) card that every employee and contractor to the United States federal government is supposed to carry. Those in the military may also know this as a Common Access Card (CAC). Regardless of the name, the format is the same and should be included with the badge to properly identify the law enforcement officer.

The requirement for PIV cards as a common control came as a result of President George W. Bush issuing Homeland Security Presidential Directive 12 (HSPD-12) that called for a mandatory, government-wide standard for secure and reliable forms of identification issued by the federal government to its employees and to the employees of federal contractors.

If you have any question as to the identity of any federal government official, you are allowed to ask for further identification. They must show their PIV card to confirm their identity. When you look at the PIV card, make sure the name and picture match the person in front of you. Also, ensure the agency on the card matches the agency the person claims to be from. It is not enough for the PIV card to say the person works for the Department of Homeland Security (DHS). DHS does not do direct law enforcement. It should say that the PIV card was issued by the ATF, U.S. Secret Service, or any other appropriate law enforcement agency including the Federal Bureau of Investigation (FBI).

Before you buy expensive coins and bullion from a stranger you may want to take a lesson from foreign policy: trust but verify.

He wore an ATF badge when meeting with his victims to put them at ease, authorities said.

Vancouverite Alexandra Lefort’s passions for painting and planetary science came together when the opportunity presented itself to design the Royal Canadian Mint’s latest silver coin.Gr…

Got old or rare coins? Head to Sharonville this weekend

If a colonial U.S. coin is jangling in your pocket, consider a visit to Paul Padget’s corner booth this weekend.

US nickels cost seven cents to make. Scientists may have a solution

Since 2006, the metals used to make nickels have exceeded the value of the coin itself.