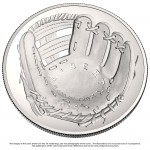 Winning design for the obverse of the 2014 Baseball Hall of Fame commemorative. (Image courtesy of the U.S. Mint)

On April 15, 1947, Jackie Robinson debuted for the National League’s Brooklyn Dodgers and on July 5, 1947, Larry Doby integrated the American League with the Cleveland Indians.

This past week, Senators Time Scott (R-SC) and Cory Booker (D-NJ) introduced the bill (S. 3239) in the Senate on behalf of the National Baseball Hall of Fame. Next week, Representatives Roger Williams (R-TX) and Cedric Richmond (D-LA) will likely introduce a similar bill in the House of Representatives.

S. 3239: A bill to require the Secretary of the Treasury to mint commemorative coins in recognition of the 75th anniversary of the integration of baseball.

To keep with the theme of making something different, such as the 2014 coins being curved, the bill calls of the new commemorative to be square and the common reverse to resemble a baseball diamond. This should be somewhat easy to accomplish since a real baseball diamond is nothing more than a square tilting on its corner.

For the obverse of the coin, the U.S. Mint is supposed to hold an open competition for artists to provide their suggestion for a design “emblematic of the integration of the game of baseball”

There will be the usual three-coin program consisting of no more than 50,000 $5 gold coins, 500,000 silver dollars, and 750,000 clad half-dollars. Surcharges received from the sale of the coins will benefit the National Baseball Hall of Fame and Museum and the Jackie Robinson Foundation.

A treasure of silver and bronze coins discovered in Georgia

The oldest coins in the find were minted during the reign of Hadrian (117-138 AD); the youngest come from the last years of the reign of Septimius Severus (beginning of the 3rd century AD). "All coins were found very close to each other in the Roman fort Apsaros" – told PAP Dr.

’Worth its weight in gold:’ Challenge coins honor good deeds in Clayton :: WRAL.com

In the town of Clayton, no good deed goes unnoticed.

‘It really is a top-notch example’

ONE of the “finest known” examples of Australia’s earliest coin is expected to fetch more than $300,000 when it goes up for auction in Sydney next week.

Armored car wreck leaves coins strewn on I-40 in Tennessee

The U.S. could issue commemorative coins on the 75th anniversary of Robinson breaking baseball's color barrier with the Dodgers.

Coins of the World on display at St. Ann's Basillica

SCRANTON — When churchgoers drop their loose change into collection bins at St. Ann’s Monastery and Basilica, whether during the novena or on regular worship days, items other than U.S. currency sometimes gets mixed in.

Police in Berlin have seized 77 apartments, homes and pieces of land belonging to the Remmo family as they charged 16 members with money laundering over the gold coin heist.

Friday demonstrations of the Nevada State Museum’s historic Coin Press No. 1 have proven so popular this summer that museum officials are extending the program through Labor Day weekend