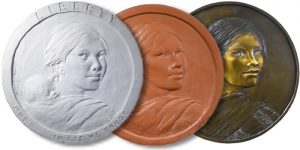 With a lot of the international news focused on the finding of ancient coins buried in old ruins, the story that caught my eye came out of Colorado Springs.

Glenna Goodacre, the designer of the Sacagawea Dollar and a graduate of Colorado College in Colorado Springs, donated several items relating to the design of the dollar coin to the American Numismatic Association Money Museum.

Donations include several plaster and bronze casts of the coin that were used to test the design and show the relief of the coin. There is also a plaster cast with an alternate version without her baby, Jean Baptiste Charbonneau, on her back.

News of the donation was published on Friday, July 13, 2018. According to the article, ANA communications coordinator Amanda Miller said that there were no immediate plans to display these items.

Following a significant donation, the ANA will issue a press release. When they do, it would be nice to read that some of these items would be on display at the World’s Fair of Money next month in Philadelphia.

An uninhabited island off the coast of Arnhem Land may be the discovery place of a medieval African coin, which, if confirmed, would be among the oldest foreign artefacts ever found in Australia.

The Money Museum, the local, official museum of the American Numismatic Association, recently announced an exciting new donation to its collection. Sculptor and Colorado College graduate Glenna Goodacre has given the museum a selection of items related to the Sacagawea dollar, for which she designed the obverse (the face side).

The tenacity of amateur archaeologists and historians searching on a remote island off the coast of the Northern Territories in Australia seems to have finally paid off. The team has found a small coin that apparently comes from a medieval African city.

The banknotes highlight Nelson Mandela’s historical journey, from the rolling hills of the Eastern Cape to the Union Buildings. More than 400 million banknotes and coins bearing the face of South Africa’s first president in the era of democracy, the late Nelson Mandela, are being released to commemorate his centenary.

A Virginia Beach coin dealer recently spent $2.64 million on a rare coin from 1834. He and his business partner are collecting coins from 1792 to present day.

Calling all coins: BOJ joins forces with GKPS in redemption drive – More than $100m in one, 10 and 25 cents coins not exchanged