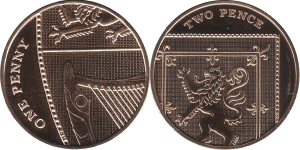 News out of the United Kingdom was that the Bank of England was thinking about eliminating the copper 1 penny and 2 pence coins. The discussion came from a blog post on the website Bank Underground, an independent blog written by Bank of England staff commenting on the Bank’s policies. The post suggested that there would be “a negligible impact on inflation, with the average impact being negative but not statistically different from zero.”

The economists that wrote the blog post has used the same argument that many others have used: the rising cost of copper and the reduced purchasing power makes the coin not worth minting.

In response, the Bank of England said that it was not considering eliminating the 1p and 2p coins.

Unfortunately, the Bank of England economists’ post will become fodder for those that want to eliminate the one-cent coin in the United States. The argument will repeat the same themes that the blog post outline as proof that this could be done.

The problem is that regardless of the position, using the arguments generated from data that does not consider social and economic information from the United States makes the using this as an example irrelevant or spurious at best.

The Ledger: Where the Rarest Coins Gleam

A block below Central Park in Manhattan, an unassuming shop appears, from the vantage point of sidewalk passersby, old, dusty, and uninteresting. Yet it contains treasures. In billboard-laden New York City, the boutique’s beige awning barely snatches a glance.

AGARTALA: A commemorative gold coin to honour Maharaja Bir Bikram Manikya has been launched on the occasion of the 110th birth anniversary of 'Tripura's last king'. The coin was released at a special Independence Day function at Ujjayanta Palace – the seat of the Manikya dynasty – by chief minister Biplab Deb, who was accompanied at the event by deputy chief minister Jishnu Dev Varma, who is a member of the royal family, and the Maharaja's granddaughter Maharajkumari Pragya Deb Burman.

RIGA — The whole mintage of the new silver collector coin dedicated to the Curonian Kings, a cultural group of free Latvian peasants that for many centuries inhabited seven villages in western Latvia, has been sold out at Bank of Latvia Cashier’s Offices, the central bank’s spokesman Janis Silakalns told LETA.

The Royal Australian Mint is paying homage to a group of iconic Ford and Holden race cars from the likes of Peter Brock, Allan Moffat, Dick Johnson and Craig Lowndes in a new series. Two fresh collections feature seven, uncirculated 50cent coins each from Ford and Holden chronicling the success of the brands in Australian motorsport.

Bank of England economists have reignited the debate over the future of 1p and 2p coins, arguing their removal from circulation would not stoke inflation. In a blog post on Wednesday the analysts said their work and the “overwhelming” evidence suggested the withdrawal of coppers would have “no significant impact on prices”.

Will 1p and 2p coins be scrapped, what did the Bank of England say and would it affect inflation?

THE Bank of England is considering plans to scrap the one and two pence coins. It comes after economists claimed that scrapping 1p and 2p coins would not push up inflation. Here’s the latest…