A token trip to Spain then to Venezuela

Now that I am running a collectibles business, I see a number of interesting items coming into the shop.

Last week, someone came into the shop with items that she wanted to sell in order to downsize prior to moving. One of the items was a small plastic bag of foreign coins. The bag contained a lot of low-value base metal coins that would trade for under one dollar from a dealer’s junk box.

Although I do not keep a large inventory of coins, I have a basket I fill with foreign coins for anyone who wants to look through them. I will sell the coins for 25-cents each even if they are worth more. When parents come into the shop with their children, I will let the kids pick out a coin. I challenge them to go online and learn what they can about the coin.

Sometimes, my assistant and I will look through the basket for something interesting. While my assistant is not a collector, she knows I am and looks for specific items I am looking for (more on that another time) and anything that looks interesting.

After moving furniture in the warehouse, I returned to my desk and found a small pile of coins. Some were part of the coins I was looking for and a token with the date of 1895. What is this coin? 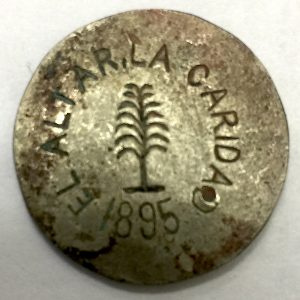 Obverse of a token from Hacienda El Altar and La Caridad. The plant in the center is likely a cane that was popular in the region. 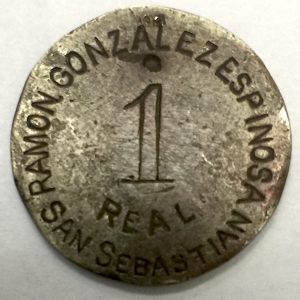 Reverse of a Hacienda El Altar and La Caridad token declaring they were owned by Ramón González Espinosa from San Sebastián and is worth 1 Real.

On the obverse and above the date is a tree. The legend around the coin says “EL ALTAR, LA CARIDAD.” On the reverse, it gives the denomination of “1 REAL” and the legend says “RAMON GONZALEZ ESPINOSA” and “SAN SEBASTIAN.” Immediately, I think this is a Spanish coin.

San Sebastián is a coastal city in the Basque region of northern Spain close to the French border. Although there is evidence of human settlement from at least 24,000-22,000 BCE, the earliest recorded evidence dates to 1014 and the monastery of St. Sebastián.

But there was no reference of a 1 real coin being issued in the region in the late 19th century or anyone in the region named Ramón González Espinosa.

Who was Ramón González Espinosa? Trying an Internet search of that name finds people with that name in California, Texas, and elsewhere around the world. Searching for Espinosa and San Sebastián also lead to a lot of irrelevant results.

Next was to figure out what El Altar and La Caridad represent. El Altar is “The Alter” in Spanish and La Caridad translates to “The charity.” Could this have been a token used to try to raise money in Spanish speaking country other than Spain?

Just to see what would happen, rather than using google.com, I went to google.com.mx, the site that serves Mexico and Latin America. I entered the information for all of the legends and searched. When too many items came up and my rudimentary Spanish found that they were irrelevant, adding quotes around each phrase lead found an interesting page.

On a blog that is written by a Venezuelan numismatist, there was an article with an image of the same token. Using translation software, I was able to obtain enough information to learn more about the token.

During the late 19th century, Venezuela was undergoing a financial crisis that caused a severe coin shortage. The situation became so bad that the haciendas, plantations in Venezuela, could not pay their workers. To help solve the problem, hacienda owners would create their own tokens to act as promissory notes. They would pay their workers using these tokens. When coins were available, the hacienda owner would pay the merchants.

These tokens circulated as money throughout the region.

The token we found was from the Hacienda El Altar and La Caridad, both were the properties of Ramón González Espinosa. Espinosa’s properties were located in Aragua State

The haciendas were in San Sebastián de los Reyes (Saint Sebastian of the Kings) in Aragua State. The town is located on the Guárico River that leads to the Caribbean Sea. El Altar and La Caridad were livestock farms.

It is unusual for the names two haciendas to appear on a single token. According to references about other tokens from this era, when the same person owned multiple haciendas they had tokens made for each of their properties to distinguish the accounts from each other. Since there were no other references for tokens with more than on hacienda, it is not known as to why Espinosa created only one token.

Most tokens from this era were made using a copper-nickel alloy that ranged from 40-60 percent nickel. Most were thin discs and had different shapes. Hacienda tokens ranged in value from ½ Real to 5 Reales. Tokens from Hacienda El Altar and La Caridad were issued in ½, 1, 2, and 4 Reales.

Slowly, there was enough of a coin supply that it ended the need for hacienda tokens. But they continued to circulate because hacienda owners used it as a way to control their workers. When Juan Vicente Gómez overthrew Castro, who left Venezuela in 1908 for medical treatment in Germany, he instituted a rule to end the circulation of these tokens by ordering the hacienda owners to buy back the tokens using state currency.

It is estimated that over 10,000 tokens were once in circulation. After the order was given to redeem the tokens most were melted and used for other purposes.

Although it is rare to find one, they are not worth much in the numismatic market. However, finding one allowed me to learn more about its origin, hacienda tokens, and how the United States helped in ending this practice.

In other words, yet another reason why numismatics is a fun hobby!