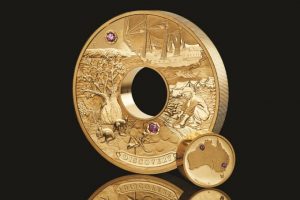 The ‘Discovery’ coin, encrusted with rare pink diamonds, was created by the Perth Mint. (Image courtesy of The Business Times)

One of the news items this week is that the Perth Mint created the “Discovery” coin, a 2-kilogram (4.4 pounds) gold coin with rare pink diamonds that depicts the discovery of Austrailia and the mining culture that grew on the island nation.

Modeled after the Holey Dollar, Australia’s first coin, it features four 1.02 karat pink diamonds mined in Western Australia. The center of the holey coin is included as part of the set. For the record, the coin as a reeded edge.

Perth Mint officials said that the coin, worth A$2.48 million (US$1.76 million), was created to “meet growing demand for high-end collectables from the ultra-rich.” It will be sold at auction with expectations that the buyer will be from Asia or the Middle East.

What is the point of making a coin like this?

Aside from extracting money from someone whose pocketbook can match his ego, is there a good reason to make these coins?

Of all of the questions as to whether what the U.S. Mint does is good for the hobby, where does this gimmick rank in comparison?

The platinum producers finally appear to be making headway with the SA government on the introduction of a platinum coin judging from recent comments made by Minister of Mineral Resources Gwede Mantashe Mantashe is currently in Perth, Western Australia where he addressed the Africa Down Under conference on August 29.

Finance minister Nhlanhla Nene has published the official designs and specifications for the 2019 Natura coin series. The series will focus on the Cradle of Humankind and features a number of hominid discoveries which were made in South Africa.

From today you will be able to pre-order a limited number of the newly minted Armistice Day coin for delivery in October, right in time for Armistice Day. The new coin is a legal tender, coloured, circulating 50c piece.

Everyone knows how the old saying about comic book collectors goes: there’s one born every minute! So there should be no shortage of fans intrigued by the latest offering from the Royal Canadian Mint.

Australia mints its most valuable coin

Sydney AUSTRALIA has minted a gold coin encrusted with rare pink diamonds worth A$2.48 million (S$2.45 million) to meet growing demand for high-end collectables from the ultra-rich. The 2-kg treasure, which depicts a sailing ship, a gold prospector and boab trees found in Western Australia, is considered legal tender and will be sold to the highest bidder.

Archaeologists in Sweden have discovered a gold ducat from early medieval Venice in Elleholm, a once thriving port that has now entirely disappeared.

While coins may just be cheap change to some people, others like Jack Zillion and Dennis Witter see them worth much more.

It’s been a busy summer for construction in Dawson City, Yukon — which means it’s also been busy for the territory’s archeologists.

Paper, coins still have a place in our wallets and purses, federal officials say

Despite the advent of credit cards, cryptocurrencies and other forms of online money, coins and paper still remain relevant