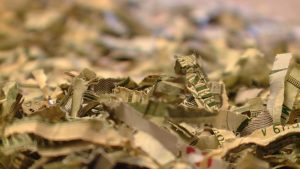 Couple’s two-year-old shreds over $1,000 in cash! (Photo courtesy of KSL-TV by Tanner Siegworth)

The story of the week has to have come from Hollady, Utah where a couple’s two-year-old son shredded more than $1,000 in cash.

In a case where real-life intersects with “oh my gosh,” the toddler took an envelope of cash and passed it through the shredder. All the child knew is that mommy was passing paper through the shredder, it made a cool noise, and created small pieces. What the child did not understand was that mommy was shredding junk mail (a good idea) and he did not know the difference between junk mail and paper money.

The money was to be used to pay the husband’s parents back for season tickets to the Univerity of Utah football games. The Utah Utes are currently 3-2, 1-2 in Pac-12 play after defeating Stanford 40-21 in Palo Alto.

All is not lost for the family. The Bureau of Engraving and Printing has a Mutilated Currency Redemption program. It is a free service that the family can use to recover from this incident.

According to the BEP, the programs handles approximately 30,000 claims each year and recovers over $30 million in cash. But the process can take time. With the limited resources that the BEP has to work with and the time it would take for the BEP’s team to reconstruct the shredded notes, the family may have to wait at least two years.

They do not call it the “terrible twos” for nothing. Next time the family may either want to hide the cash in safer location or write a check. A check can be rewritten more quickly than sending the money to the Mutilated Currency Redemption program.

If you have a social media account like Instagram, chances are you would have been offered up to US$10,000 (RM41,400) for old notes and coins by collectors. Does it sound too good to be true? The Royal Malaysia Police (PDRM) says it is and warns that you may end up losing your money as it could be another scam.

The story of Armistice Day. Credits: Images courtesy of Alexander Turnbull Library, Wairarapa Archive, Palmerston North Libraries, Archives New Zealand and the Auckland War Memorial Museum. From this month you may find a colourful new coin in your change.

The owner of a Vancouver coin shop allegedly defrauded customers out of $1.3 million, according to a federal indictment announced Wednesday. Blue Moon Coins owner Aaron Michael Scott, 40, of Portland was indicted by a grand jury on 11 counts of wire fraud and five counts of mail fraud, according to a statement released by U.S.

"The products in our R+D Lab Collection are tried, tested and true examples of forward-thinking technology that could re-define the future of domestic and foreign coins," said Dr. Xianyao Li, Chief Technology Officer at the Royal Canadian Mint.

Love of notes and coins keeps the Japanese brain awake

The Japanese love their cash. Cash as in physical notes and coins. Not the electronic variety that floats around in cyberspace instead of bouncing about in purses and pockets. Surveys show that we are totally behind the times in our attachment to the ¥10,000 and ¥1,000 notes and the way…

A Holladay family is figuring out how to replace more than $1,000 in cash that their 2-year-old son sent through the shredder.