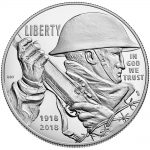 To us in America, the reflections of Armistice Day will be filled with solemn pride in the heroism of those who died in the country’s service and with gratitude for the victory, both because of the thing from which it has freed us and because of the opportunity it has given America to show her sympathy with peace and justice in the councils of the nations.
—U.S. President Woodrow Wilson proclaiming November 11, 1919 the national holiday Armistice Day
To all that have served…
To all that have given the ultimate sacrifice…
To the families of these honored service members…
THANK YOU!

On Thursday, 8 November, Latvijas Banka will be issuing a new gold collector coin named "Gold Brooches. The Bubble Fibula" with a face value of 75 euros but which will actually cost you 560 euros. The coin replicating a "bubble fibula" (of which more below) is the last one in the series of euro gold collector coins dedicated to Latvia's centenary.

A collection of three 50p coins were released by the Royal Mint on November 5, including a 22 carat Gold Proof coin, a Silver Proof coin and another Brilliant Uncirculated silver coin.

The White House clearly did not employ the services of a copy editor before releasing commemorative coins from Donald Trump’s summit with Russian President Vladimir Putin in Helsinki, which contain no less than three typos.

THE Royal Mint has released a special Remembrance Day commemorative £5 coin featuring a colourful red poppy design. The mint releases a new coin every year to remember all those who have fought for this country at war and this year is no different.

Israeli guards at the Erez Crossing on the Israel-Gaza border this week apparently foiled an attempt to smuggle out two ancient coins from the period of Alexander the Great out of the coastal enclave, Israeli officials said Friday.