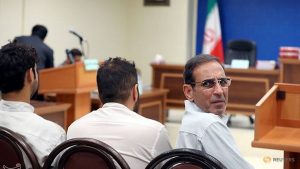 Vahid Mazloumin is seen appearing in court for the first time on charges of manipulating the currency market. He was later sentenced to death, in Tehran, Iran. September 8, 2018.Tasnim News Agency /Handout via REUTERS (via ChannelNews Asia)

Coin collecting, whether it would be enjoyment or profit, received a black eye this week as Iran executed Vhid Mazloumin, the man nicknamed the “Sultan of Coins.” Mazloumin and his accomplice, Mohammad Ismail Ghasemi, were hanged in Tehran on the charge of manipulating the coin and currency market in charges that included smuggling.

The charges stem from a new round of sanction by the United States that has Iranians hoarding gold and looking for other safe investments. To serve that market, Mazloumin and his associates began to trade in gold coins and bullion.

Up until the sanctions, Iran did not have many restrictions on the trading of gold and other bullion but found itself in another financial crisis. The Iranian central bank is reporting a reduction of reserves and those with the means to purchase gold have been doing so at a rate higher than in the past.

According to many reports, Mazloumin was caught with non-Iranian coins and bullion including bars made by Swiss and German companies. Amongst the charges included trading in gold American Eagle coins and Krugerrands. As part of this defense, Mazloumin claimed that the coins were imported before the ban.

What is troublesome is that the collecting and investing communities have been silent on the execution of someone whose actions were made retroactively illegal by a panicking government. It is a more extreme version of blaming the collector for the financial crisis, such as the United States did in 1964 over silver coinage.

Although someone will inevitably ask if condemnation will do anything, just remember how an industry condemned the actions in Turkey and the United States over actions against journalists. Communities that do not stand up for itself run the risk of allowing governments to run roughshod over them at their convenience.

Therefore, I CONDEMN IN THE STRONGEST POSSIBLE TERMS THE STATE-SPONSORED MURDER OF A COIN DEALER IN IRAN!

I urge the rest of the numismatic and investment industries to join me before someone comes for you!

DHAKA, Nov. 12 (Xinhua) — Shelves and cases in the money museum in Dhaka, capital of Bangladesh, are filled to the brim with coins and currencies from the barter era to modern times, with the displays attracting many visitors.

A local fire department wants the public's help in making the Holidays special for members of The Armed Forces.

The coins that saved a soldier's life

These coins both endangered and saved Optatius Buyssens's life, as he fought as a soldier during World War One

Expert: Coins worth more than meets the eye

On November 14 the national Bank put into circulation four commemorative coins of irregular shape. This reports the press service of the regulator on the official page in Facebook, writes the Chronicle.info with reference to epravda.com.ua.