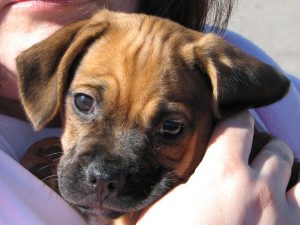 On December 3, 2006, I wrote about our new acquisition. A day before that post, we traveled to southwest Virginia to adopt Boomer. At the time, Boomer was a 9-week old Puggle. Boomer was a very cute puppy with a stub for a tail. We were accused of cutting off his tail but that was the way he was born.

Boomer was far more intelligent than he originally let on. As many puppies do, he explored his limits he began to not only understand what he could or could not do, but how to pull at his new mommy and daddy’s heartstrings.

A cross between a pug and a beagle, Boomer showed more of the personality of the beagle but had the snuggle ability of the pug. Boomer was a snuggler, always wanting to sit on the couch or crawl into bed to snuggle with us.

Like the beagle, Boomer could bark and howl with the best of them. He was our storm warning system. When the thunderstorms were off in the distance, Boomer would warn us and howl right through the storm. We nicknamed him Thunder Boomer.

When we brought home Tessa, he was tolerant of her mishegas. She was much more active than the laid back Boomer but I think they grew to like each other. Tessa was really attached to her brother. 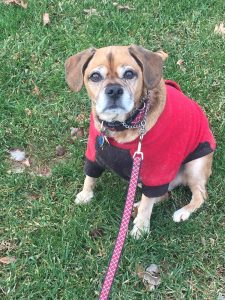 This is our last picture of Boomer taken the morning of December 24, 2018. Good bye sweet prince!

He was intelligent beyond that of an ordinary dog. He learned certain conversational cues and could react to them as we spoke. He would also teach us to respond to him by using those cues and his body language to tell us what he wants. It wasn’t a good time for a walk but he needed to go out? Stand in a certain place and let us know to open the back door. Did he want some attention? Tell us it was time for bed? Or any other thing that was on his mind? He had his own language and we were able to communicate.

Of all things, Boomer was a kind, sensitive, and loving dog who loved to be around us always wanted to snuggle and loved the attention. Since my wife and I could not have children, Boomer was our son.

At 5:25 am on December 25, our baby Boomer left us for his next adventure. He was a beautiful and smart boy. Always loved and always loving. Goodbye to our sweet prince.