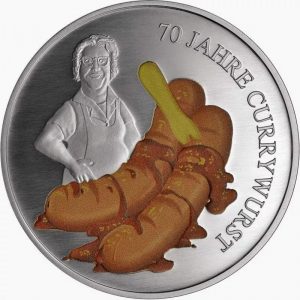 Currywurst is considered the national fast food delicacy of Germany. It is a pork sausage that has been sliced part of the way through, boiled then grilled, and served smothered with ketchup mixed with curry powder. Curry powder is sprinkled on top.

According to a friend who spent time working in Germany, currywurst stands are as ubiquitous in Berlin and many other cities as hot dog stands are in New York. Depending on the stand, they can be served on buns, with sauerkraut, or fries. Since returning to the United States several years ago, he says that his family enjoys the German dish frequently.

Now that the Berlin State Mint has broken this barrier, who’s next? Will the Royal Canadian Mint produce a coin honoring poutine? Or will the Royal Australian Mnt grace a coin with Vegemite? I don’t even want to think about a coin commemorating haggis!

Click image to enlarge MIDDLEBURY, Vt. – A coin collector from Lewiston, Maine, with no prior connection to Middlebury, has donated more than 1,000 ancient coins to the Middlebury College Museum of Art.

A German coin manufacturer has commemorated the country’s love of currywurst with a speciality coin to mark 70 years since the savoury snack was first sold in Berlin. The silver alloy coin, made by Staatliche Munze Berlin, or the Berlin State Mint, features an image of the delicacy’s inventor alongside two giant sausages drowning in curry sauce and pierced with a wooden fork, as is tradition.

A silver medal-thaler, issued by Romanian ruler Constantin Brâncoveanu in 1713, sold for USD 16,000 at a numismatic auction in New York, Profit.ro reported. Brâncoveanu, who was a prince of Wallachia between 1688 and 1714, was deposed from his throne by Sultan Ahmed III.

New Delhi: A new book traces India's numismatic history through 133 rare coins which are illustrative of the country's antiquity, ethos and traditions. In Suvarna Mohur: India's Glorious History Illustrated through Rare Coins by Arun Ramamurthy, Indian history has been divided into 20 epochs.

The Maine Bureau of Veterans’ Services (MBVS) is pleased to announce the final design selection for the new State of Maine Honorable Service coin and plaque, which will honor all Maine veterans, past and present, regardless of their branch or era of service.

SINGAPORE: The number of coins that a buyer can use in a single transaction will be streamlined and standardised to 20 coins per denomination after Parliament passed the Currency (Amendment) Bill on Monday (Jan 14).

Treasury wants to buy all those coins you don't want

Mobile coin exchange units are hitting the roads to encourage people to swap the loose change they have collected for easier to handle banknotes, so the coins can be recycled. The modified trucks, which are green and clearly marked with the Treasury Department logo, have a window along the side where the coins can be exchanged for notes of equal value.

In Berlin, the participants of the most unusual robbery of recent years went on trial. Three young Arab migrants stole a considerable gold coin from the museum using only an ax handle, ropes, stairs, and carts.

Greater Houston Coin Club members have been on a mission to get kids involved in the hobby.