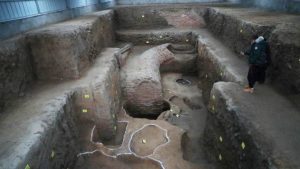 Archaeologists found fragments of ceramic coin moulds at the site when they were carrying out repairs after heavy rain in late 2017.
(Photo: South China Morning Post)

Some of the best finds are accidental. In China, archeologists were working in an area when the rain uncovered an ancient mint in 2017. The area of discovery was not where they were searching but a staging location.

With only a portion of the facility excavated, the archeologists found nine areas that could have been used as part of coin production. There was one kiln site that was likely used to create porcelain coin molds and eight ash pits. They also found copper coins, coin mold fragments, and other items that were used as part of the coining process.

The China Numismatic Society told news sources that the inscriptions on the molds date the facility to 9-23 AD and corresponds to the reign of Wang Mang of the Han Dynasty.

Finds like this shows how the use of money and numismatics can lead to better understanding of societies what may have been lost.

It’s been dubbed one of the loveliest coins ever minted and, almost two centuries after it was struck, it’s making headlines again. A rare gold five pound coin, featuring an idealised image of Queen Victoria in the early years of her reign, has sold for a six-figure sum at a private auction.

Archaeologists discover fragments of ceramic moulds, copper coins and a kiln site where an ancient government office once stood

Penny for your memories? Treasure your coins for now – The Boston Globe

“There used to be this thing called money,” people will say in the future. And children will laugh. “You’re joking,” they’ll say.

The best-known U.S. Mint building in San Francisco is at Fifth and Mission streets, right across the street from the Chronicle building. The Old Mint is an imposing classical structure, but it’s been retired as a money-making plant for more than 80 years. By the early 1930s, the building was too antiquated to meet the increased demand for coins. So the U.S. Treasury found a second location, at Duboce and Buchanan streets, where a natural rock promontory could function as another layer of security. A search through The Chronicle’s archive uncovered photos of the construction of the New Mint in 1936, as well as the coin production work happening inside.

The Royal Canadian Mint has uncovered the identity of the soldier who inspired its new silver dollar coin, which commemorates the sacrifice of Canadian soldiers on D-Day.

A 10-year-old Indian boy who lives in Oman has collected more than 500 coins from across 120 countries.