Brace yourself, the U.S. Mint is about to release another product for the kids 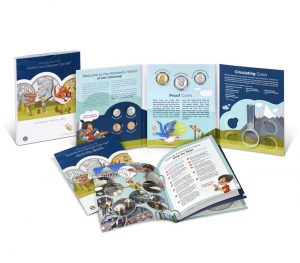 Although the U.S. Mint has not formally announced it, on March 28, 2019, they will make the 2019 Explore and Discover Coin Set (Product Code 19XGB) available to the general public. It is the second of three sets to be issued this year designed to get kids interested in coins.

This set features new characters they call the Mighty Minters.™ According to the U.S. Mint, the Might Minters are “fun, diverse, and relatable ambassadors to children, parents, and gift-givers. Each character projects its own style while introducing a variety of new Mint products to kids.” Although the concept may seem cheesy to us alleged adults, those who deal with the diverse population daily understands that in order to get the younger people interested they have to be engaged on their level.

I know. I know. It was different when we grew up. Back then you could still find silver coins in pocket change. Wheatback cents were about as common as Memorial cents are today. People even tried to use Susan B. Anthony dollars in their daily lives before confusing it with a quarter.

But that was the past.

Today’s children have a much different view on things. For one, if they are 18 years old or younger, they were born after 9/11 or were an infant and do not remember what happened. They grew up with the Internet, smartphones, and computers everywhere doing nearly everything. You can get access to everything at almost any time while their parents always bought things online.

Not only is money still important but the United States government owns the world’s largest money manufacturing business. No other mint manufactures, sells, or is more profitable than the United State Mint. It is an agency that does not get enough credit for producing billions of dollars of goods that our economy thrives on.

The U.S. Mint’s products are useful and collectible. And while there have been a few design issues, it is able to produce millions of versions of the art that people carry around daily and with an error rate that should make any company envious.

Errors are a fun aspect of the hobby because the rate of the errors is low. This is likely why the U.S. Mint is including a blank one cent planchet in the set. Not only does it show what a coin looks like before it is struck, but it also introduces kids to error collecting.

The Explore and Discover Coin Set introduce kids to the full range of circulating products produced by the U.S. Mint including the longest running design in the Mint’s history: Victor D. Brenner’s Lincon cent design.

In addition to a 2019 Jefferson Nickel and Roosevelt Dime, they are introduced to the Kennedy Half-Dollar. One of the quickest coin designs ever produced, the Kennedy half-dollar is not circulated as half-dollars once were. Although there are a lot of theories as to why half-dollars stopped circulating, one was that the 1964 half-dollar, which was made using an alloy that was 90-percent silver, was saved by many in honor of the slain president coupled with the coin shortage that followed effectively ended the coin’s circulation.

These are two coins that should help kids not only learn about the coins but also about the subjects they depict. This should not discount the dollar coin’s obverse of Sacagawea carrying her baby, Jean Paul Baptiste.

It is another opportunity for the hobby purists to weigh in on how the U.S. Mint is getting it wrong before it sells out!