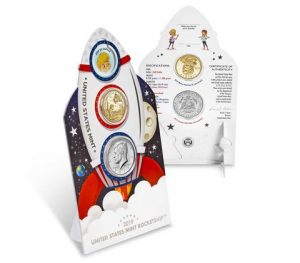 Last week, the U.S. Mint reported that the sales of the Rocket Ship Set is close to being a sellout. With an announced limit of 50,000 sets, they said that 46,762 were sold.

The Rocket Ship Set is a coin product produced for kids to tie in with the space theme generated by the 50th Anniversary of the Apollo 11 Commemorative Coin program. The set contains two coins: an uncirculated 2019 Kennedy Half Dollar an a proof Native American $1 Coin honoring American Indians in the Space Program. The coins are mounted on a card shaped like a rocket ship that glows in the dark and can be set up to stand up on a desk, shelf, or anywhere else.

The text an the card explains the significance of the coins in honoring the space program written for children.

When the set was announced, there was a lot of commentary how the U.S. Mint was wrong for doing this. I read and received emails saying that this is the wrong way to reach children that many thought this set would barely reach 15,000 units sold.

While the numismatic snobs were throwing around adjectives like “dumb” and “stupid” claiming it is “bad for the hobby” and wondering out too loud what the U.S. Mint was thinking, customers bought up 93½-percent of the available inventory in two-weeks!

Although we do not know how many of the sales are to dealers or other institutional buyers, the fact that there is that level of interest suggests the U.S. Mint might have a better idea as to what’s good for the hobby than the snobs.