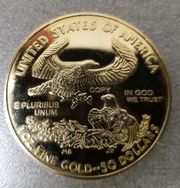 One of the most popular stories on this blog that people find via a search is “How easy is it to pass counterfeit currency.” I wrote it in response to watching a cashier use a pen with iodine-based ink used to determine whether the paper used is counterfeit and how it can be defeated.

A lesson learned is that people do not pay attention or care, which is why the iodine pen is popular. This is why the story of the week is about a person in suburban Des Moine, Iowa is wanted for passing a counterfeit American Gold Eagle coin.

According to the story, the suspect, who has been identified, used the alleged gold coin to purchase $25 worth of merchandise from a gas station. The next day, the clerk who took the coin found it was fake after taking it to a local coin shop.

Although the story does not say why the employee accepted the coin as payment, I speculate there was a greed motive involved. The suspect probably convinced the clerk it was real and that worth more than the $50 face value but was low on cash and needed the merchandise. The clerk thought that the coin is worth more took it hoping to make a profit.

If the coin was worth more than face value, then why did the clerk not ask why the suspect did not take it to a coin shop himself?

Even if you do not know the price of gold, why would someone try to use a valuable coin in a gas station?

I have commented in the past about the perpetual hunt for “rare” 50 pence and £2 circulating commemorative coins in the United Kingdom. At least by publicizing the coins, Britons learn a little about the coins issued by the Royal Mint. In fact, if you are watching my Twitter feed (@coinsblog), I post stories about other countries that produce stories about coins put out by their country’s mints.

Unfortunately, the best we get in the United States outside of the numismatic media is an infrequent blurb in a local news source. The Washington Post’s new motto is “Democracy Dies in the Darkness.” It also dies with ignorance especially when movie money is mistaken for real.

Worried about buying a fake when you shop online? Here's how you can keep counterfeits out of your shopping cart. David P.

Richard Masters’ work for the U.S. Mint is a marriage of his interest in art and his boyhood hobby of coin collecting. A former professor of art at the University of Wisconsin Oshkosh, Masters has designed 21 coins and five medals, including the 2009 Bicentennial Lincoln Cent (Log Cabin), the 2011 Sacajawea gold dollar reverse and the 2017 America the Beautiful Effigy Mounds (Iowa) quarter reverse.

Finance ministry had issued a notification on March 6 announcing the launch of 5 new coins in the country namely new One Rupee, Two Rupees, Five Rupees, Ten Rupees and Twenty Rupees. The new series of coins are visually impaired friendly and have enhanced design.

Urbandale police are looking for a man who used a counterfeit $50 coin to make a purchase at an Casey’s General Store in February.

Warwickshire County Council wants to raise £62,000 towards buying a hoard of Roman coins.

Coin which saved First World War soldier up for auction

More A lucky penny which deflected an enemy bullet during the First World War One – saving a soldier’s life – is set to be sold at auction. Private John Trickett would have been shot in the heart if the bullet – which still left him deaf – had not struck the coin in the breast pocket of his uniform.