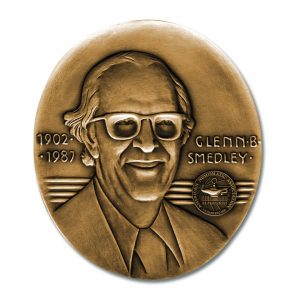 This evening I was loading my truck to make a delivery. At least once per week am running out the door after closing to deliver items when my cell phone rang. After lifting a large desk into the bed of my pickup truck, I was initially dreading the call. This customer has canceled before after I loaded the truck.

But this was different. The call was from American Numismatic Association Executive Director Kim Kiick. As chair of the Technology Committee, or I think we are now called the money.org committee, we discuss issues that arise making a call from Colorado Springs not surprising. After securing the desk, I did not listen to the message. I just called her back.

Today’s call was different. Kim was not calling me to discuss an issue but to give me the news that the ANA Board of Governors has selected me to be the 2019 recipient of the Glenn Smedley Memorial Award!

I was and am still SHOCKED! And very honored!!!

First, from the ANA’s website: “The Glenn Smedley Memorial Award was created in memory of Glenn B. Smedley, a collector’s collector, to recognize individuals who have devoted their efforts to the betterment of the ANA.”

I became a member of the Technolgy Committee a few years ago after publishing many articles on this blog about how far behind the ANA was in the use of technology. It was a chance to put-up or shut-up.

When the chair of the committee resigned, I was asked to succeed him. That was not a problem. I continue to believe in the mission of the ANA, and I believe that the only way to bring in younger members is to find ways of making the ANA more technology aware. I was not doing this for awards–especially now that I am trying to run a business.

I am rarely overwhelmed. Then I went to the website to see the list of past recipients and I am in absolute awe of the decision.

The award will be presented at the World’s Fair of Money this August. I should probably make arrangements to be there!

THANK YOU TO THE ANA BOARD OF GOVERNORS FOR THIS HONOR!