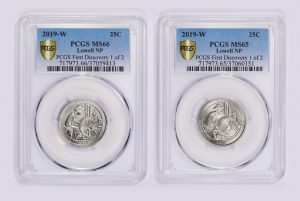 This week, the Professional Coin Grading Service announced that they would provide a $5,000 for the first collector to send in a new 2019-W Lowell National Historical Park quarter. By Friday, PCGS announced that two people won the prize. Each will receive $2,500.

During the week, I had two occasions to go to the bank and purchase rolls of quarters. Even though I asked for new rolls, most of the quarters I received were either from 2018 or non-W mint quarters from 2019. In the shop, I checked every quarter received for payment and when I received quarters in change.

The competitive side of me wanted to be the first, or amongst the first to find one of these quarters. Even after running errands earlier today, I did not find any coin struck in 2019.

PCGS is still rewarding those who find the W mint quarters with special labels and cash prizes. Even though the top prize was claimed, I want to find one in change!

When you rifle around in your purse for some change soon, you might be lucky enough to pull out a new 50 cent coin, launched today by the Royal Australian Mint to celebrate the International Year of Indigenous Languages.

Country continues tradition of honoring icons of art and science over politicians on its currency.

Australia has issued a new coin celebrating some of the country’s indigenous languages, many of which are at risk of extinction.

Why Is Gold So Valuable? The Complete Guide by Gainesville Coins

Why is gold valuable? For thousands of years, gold has functioned as a store of wealth that sees its value climb in times of economic or societal unrest. Gold jewelry has been a sought-after luxury good since before the dawn of the first civilizations.

SARANAC LAKE — Stephen Krupka’s metal detector beeped and wailed as he passed it over the soft ground Tuesday afternoon. “Looks like we’ve got a nickel signal here,” he said. Kneeling down, he took out a serrated hand trowel and cut a plug of grass from Denny Park on the corner of Pine Street and Bloomingdale Avenue.

A treasure hunter has struck it rich after digging up a 500-year-old gold coin that could be worth more than £4,000 ($5,200), but refuses to part with his rare find. Gareth Millward unearthed the coin in a field near Ashbourne, Derbyshire, and says it is the highlight of his four-year hobby.

(Kitco News) – Wall Street is split on the near-term direction of gold prices, while Main Street remains bullish, according to the weekly Kitco News gold survey.