National Coin Week is celebrated every third week of April to bring awareness to those neat little metal items jingling in your pocket as something that makes a fun collectible. This year the numismatic community is going all out to get you to look at your change with the Great American Coin Hunt. Why? Because change hunting is how many of us started. While finding silver coins may be rare (or is it?), there are still collectible coins in circulation.

Round Table Trading is a nationwide organization of coin dealers. Members of the Round Table have committed to placing collectible coins into circulation. Coins will range from Indian Head Cents to Morgan Dollars and everything in between. You may want to examine that dime you just received in change carefully because it could be a Mercury Dime that was struck by the U.S. Mint from 1916-1946. 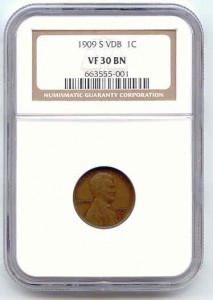 One dealer said he placed a 1909-S VDB Lincoln Cent in circulation. When the Lincoln Cent was introduced in 1909, there was an outcry because the designer of the coin, Victor David Brenner, put his initials at the bottom of the coin’s reverse. After producing 484,000 of the coins in San Francisco, production was interrupted so that new dies can be made without the “V.D.B” initials (the lack of a period after the B is not a typo). If you find a 1909-S VDB cent in your change, it will be worth about $2,000! Although I own one of these coveted coins, I will also be looking!

Also, look for coins with silver and gold stickers on them. If you find one, bring it to a coin dealer and redeem it for something worth more. Silver stickers can be traded for silver coins, and gold stickers will get you a gold coin. There are rumors that some dealers will redeem a gold sticker for a Saint-Gaudens Double Eagle ($20) gold coin worth more than $2,500.

The U.S. Mint is also participating by releasing the first-ever circulating coins with the “W” mint mark to indicate that the coins were minted at the facility in West Point, New York. In 2019, the U.S. Mint will add 10 million quarters, two million for each of the 2019 America the Beautiful Quarter Series coins, into circulation. After being struck at West Point, 1 million of each quarter will be sent to the mints at Philadelphia and Denver to be mixed in with the circulating coins that will be delivered to the Federal Reserve.

Although you might think that producing 10 million coins is not rare, consider that the U.S. Mint will produce nearly 1 BILLION quarters in a year making it about 1-percent of the Mint’s quarters production.

Finally, the American Numismatic Association is holding a 2069 coin design challenge and an Online Trivia Challenge. Visit the ANA website daily for the rules and a new daily question.

GREENWICH – A high school senior from Greenwich is bringing a very modern approach to the ancient pastime of coin collection. Christian Hartch, 18, was given a small collector's book for pennies by his father, Greg, when he was 5. He's been obsessed with numismatics, the study of coins, ever since, and brought his enthusiasm to thousands of followers on YouTube.

Byzantine ruler created the 438 Theodosian law code, which collected the thousands of imperial laws of the sprawling empire and officially made Jews second-class citizens

A new dollar coin designed to commemorate 50 years of homosexual rights has sparked a dual backlash — from both members of Canada’s LGBT community and from a social conservative group.

A gold and silver coins hoard was found by four treasure hunters with a metal detector in a field in Buckinghamshire and includes 12 rare full gold coins from the time of the Black Death.

A rare penny that was found by a teenager in his lunch change more than 70 years ago is on display at a coin show in Manchester.

EASTON &#x2014; Take a moment to really count your change next week, you might be surprised to find some unusual and collectible coins.As part of National