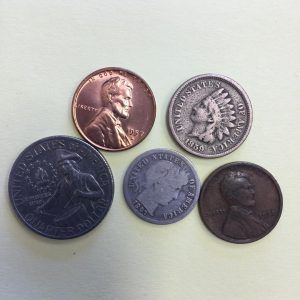 National Coin Week has come and gone, and I did not find anything in my change. Even though I purposely carried one and five dollar bills to create change, there was nothing to be found.

In my shop, I advertised that I would trade a 40-percent silver half-dollar for a W mint quarter. Most of the people who came by did not know about the quarter.

While the lack of interest seems disheartening, there appears to be a growing problem with the coverage of these stories. Aside from a few local accounts, there were few reports from the national news media. Even with Congress being out of town this week, all of the national press seems to be buried in their respective corners looking for red meat to chew.

No wonder the public does not trust the media.

And where was the numismatic community? Last week, I was busy posting a lot of news releases from the numismatic industry (news.coinsblog.ws). This week, the only post was a found video from a few years ago. Where were the national or regional organizations?

If nobody knows the numismatic industry is here and cares then why should anyone care?

It might be time for the numismatic industry to have a lesson in public relations because if they think what they are doing now is working, the foot traffic into my shop where collectors of all type visit tell me it is not!

Archaeologists have been researching interesting findings in the Liptov region. A married couple during a hike to the Choč mountain near Likavka made a great discovery of silver and two golden coins from the turn of 15th and 16th century, My Liptov wrote.

A group of amateur treasure hunters in England found a horde of gold and silver coins from the 14th-century that could be worth nearly $200,000 according to experts.

Collectors are expected to place millions of vintage coins and paper money back into circulation as part of a nationwide event.

How to spark interest in rare coins? Spend them, of course

A man bought a box of Milk Duds in Tiburon this week with a handful of Indian Head cents. “We’re trying to do something here,” said Don Kagin, just before using an 1876 quarter to help pay for a pound of butter.

CLAREMORE, OK. – An Oklahoma man is offering $10,000 in exchange for one penny. Richard McPheeters is a coin dealer and collector in Claremore, and he is looking for a rare penny to complete a set. This isn’t your average penny. The particular penny he is searching for is a  certified 1982 Small Date Denver mint penny made of copper. 1982 was the last year pennies were made from copper. McPheeters has 7 of these pennies out of 8 from the Denver mint and he is looking for the 8th one.

On Sale in Kabul: Mementos of America’s War in Afghanistan, for $2 or Less

Challenge coins are handed out to commemorate American military campaigns. But the trinkets carry different weight when displayed beside tokens from earlier wars that failed.

Penny to ‘priceless’: How an unusual coin found its way to Fort Mill

A Fort Mill, South Carolina man got a call from Tennessee about an unusual penny with his father’s information on it. Sgt. Clifford Wilford served the Army in Europe from D-Day to liberation during WWII.

NUR-SULTAN — Kazakhstan’s National Bank has issued freshly minted coins with engraved texts in the country's new Latin-based alphabet. The new tenge coins were issued on April 26 in denominations of 1, 2, 5, 10, 20, 50, and 100 tenges, the bank said in a statement.