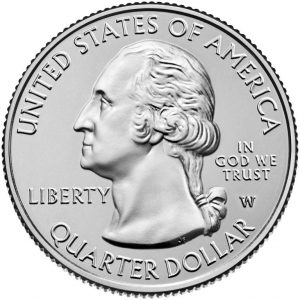 A few weeks ago, I wrote that when the U.S. Mint issues new coins into circulation, the U.S. media does not say much. Again, other than the American Legion promoting their commemorative coin, finding news in the non-numismatic press is rare.

Imagine my surprise when perusing my search of numismatic-related news in the media comes up with an article about the upcoming “W” mint quarters! The story appears on al.com, the website of The Birmingham News dedicated to cover the news for Alabama.

For those who did not see the news, last week, the U.S. Mint announced that for the first time, they would be adding the current War in the Pacific (Northern Mariana Islands) quarter America the Beautiful Quarter Series to bags of coins in Philadelphia and Denver. It will take a few weeks before these quarters will appear in circulation.

The article was a summary of the U.S. Mint press release with additional information about the America the Beautiful Quarters.

Kudos to the reporter, Leada Gore, and al.com for publishing this story!

SPRINGFIELD — Heads up, artists. The United States Mint is hosting a design competition looking for artists capable of creating the obverse, or heads, side of new commemorative U.S. Coins celebrating the game of basketball and benefitting the Naismith Memorial Basketball Hall of Fame.

The Krugerrand Gold Coin You’ll Want to Learn More About

Often it isn’t until a recession or times of economic/financial panic occur that middle-class Americans and conservative investors truly consider the impact of gold on their portfolio. While diversifying into precious metals shouldn’t be a decision you make without research, there are opportunities to invest lightly so you can begin to understand the potential that certain metals might have for your financial future when the dollar dips, but gold and silver stay stable, perhaps even growing.

U.S. Mint releases new limited edition quarters; What does the ‘W’ stand for?

Jersey coin finders are not keepers

Two metal detectorists who discovered an unprecedented treasure trove of coins after searching for 30 years may be wishing that finders were indeed keepers. Richard Miles, 56, and Reg Mead, 77, are at odds with officials over the valuation of their discovery in Jersey that is recognised as the world’s largest hoard of Celtic coins.

Immaculate coin worth £100,000 discovered by an amateur metal detectorist in Kent

An amateur metal detectorist scouring the grounds of a field in Kent has discovered a perfectly preserved gold coin dating back almost 2,000 years. It is emblazoned with the face of Emperor Allectu who is being touted as the first Brexiteer after he took Britain out of the Roman Empire during his reign around 293AD.

Coin shop owner gets 4 years for defrauding customers out of $1.4 million

The owner of a Vancouver coin shop who defrauded customers out of $1.4 million was sentenced in federal court Friday to four years in prison.