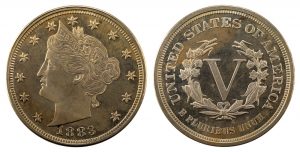 A story that appeared in the Desert Sun seems to defy what some in the numismatics industry wants you to believe is successful collecting. The problem is that it is narrow in focus.

The article talks about the dealer’s held belief that successful coin collecting is about the hunt for the perfect coin. It is finding the right coin for your collection then making it better. Unfortunately, the more this industry holds on to these notions, they are scaring off potential collectors.

What the article and dealers do not want to tell you that it is perfectly acceptable to pick a set, topic, or series and find examples that are good or consistent with the rest of the collection. They tell you that you have to buy the coin in the latest piece of plastic with the highest number and graffitied with stickers. But what they do not tell you is that you can find better-looking coins at lower grades and many times without stickers or entomb in plastic.

One of the best looking collection I saw was a Liberty Head “V” Nickel set with all of the coins in extra fine (XF) condition. It is a more difficult collection to assemble than one might think. These coins were the workhorse of the economy. Their copper-nickel alloy was softer than the silver coins and wore quickly. It is challenging to find 19th-century coins in XF condition.

The set will not bring its assembler a lot of profit since the Liberty Head nickel is not in high demand. Instead, it is an accomplishment by a dedicated collector whose goal was to have fun.

Maybe that is the key to promoting the hobby. Let’s have some fun and stop worrying about what is the right or wrong way to collect!

A gold coin that dates back to ancient Rome and was discovered in a field by a man with a metal detector has sold at auction for nearly $700,000.

Coin collecting is an inexpensive hobby to start. Look for age, rarity and condition

Why not get the kids off the computer and into something of lasting value?

The archaeological excavations in Parion, a well-protected ancient city in &#199;anakkale, aim to shed light on the defense system of the city

Mickey Mantle and Hank Aaron were among the impressive collection.