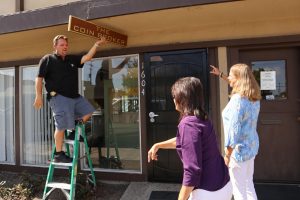 Two stories this week say different things on the state of the hobby. On Wednesday, a report that said The Coin Broker moved from their former Palo Alto home of 40 years to a new location in San Carlos. Rebecca Clay Pippin will now run the shop founded by her father, Jim Beer.

Meanwhile, in Worcester, Massachusetts, the owner of Lincoln Stamp and Coin Company announce the shop will be closing at the end of October. Owner David J. Ephraim cited that he could not continue to pay rent in Worcester, “operating on a slim profit margin, and collectors are an aging group, with few younger customers walking through the door.”

The Coin Broker solved its problem by moving to a new location. Although moving is time consuming, costly, and filled with emotion, the story makes it seem like they are ready to turn the page and continue.

For Lincoln Stamp and Coin, Ephriam is not as bullish on the market. His business does not see enough younger collectors, his regulars are either retired or dying, and those collecting are buying on the Internet.

Two stories with the same underlying problems. Two different solutions. But the hobby continues with one less place that collectors can go to buy coins.

The Bank of Jamaica (BOJ) estimates that at least J$100 million in one- 10- and 25-cent coins, the ‘red’ money, is ‘lost in circulation’ in the Jamaican economy, and has partnered with GraceKennedy (GK) Money Service in a recovery drive.

A national treasure hunt has been launched, and Australia is very much at the centre. The coins are marked to celebrate all things iconic to Australia: the meat pie, a boomerang, Vegemite, and a Hills Hoist, just to name a few.

People have been making up to $100,000 off 'coin hunting'—here's how the highly unusual hobby works

Most people use banks as a place to either borrow money or store it. But some lucky coin enthusiasts have found a unique way to get money out of the bank: bringing home rolls of coins and searching through them for ones worth more than their face value.

When Jim Beer opened the Coin Broker in Palo Alto’s Town &amp; Country Village shopping center some 40 years ago, he was retiring as a civil engineer and looking to

PM Narendra Modi released the commemorative coins of Rs 150 denomination to celebrate Mahatma Gandhiji’s 150 th birthday. The event took place in Ahmedabad, Gujarat on October 2, 2019 when the Prime Minister reached the Sabarmati Riverfront to participate in the proceedings of the Swacch Bharat Divas program.

A steamship that sank in 1840 after colliding with another ship off the coast of South Carolina contains a trove of rare gold coins, according to the dive team salvaging the wreck.

Lincoln Stamp and Coin store in Worcester is closing

WORCESTER — The bidding board is still covered with coins and envelopes are full of stamps, but the buzz is gone from Lincoln Stamp and Coin Co. The venerable business that was once the place to go for people looking for a special stamp or unique coin, is selling off its inventory and closing its doors, probably for good.