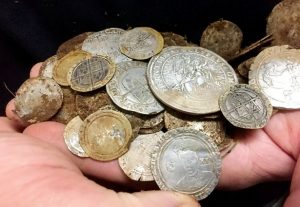 Although I am not a metal detectorist, I love reading the stories about someone going out and finding treasures. When the stories come from the United Kingdom, those finds can be exciting.

In Northern Ireland, two men looking for a friend’s lost wedding ring found a small hoard of 84 coins dating back to the 16th century. The oldest coin was dated 1512, which was during the reign of Henry VIII.

According to the story, the men who do this as a hobby, look at old maps and accounts of history to find areas that may be the sites of ancient villages or battles. Although I was surprised to read this, it makes sense, and it brings up an interesting point.

Finding artifacts buried in the ground, including coins, are a window into history. Researching where to search and understanding the history of a coin is like what archeologists do to unearth history.

I wonder if there is a way to welcome metal detectorists into the numismatic family?

A 700-year-old coin caused a whole lot of trouble

A British girl named Kate Harding was out working in the garden with her mother on a normal day. She was 9 years old and had no idea the silver coin she had just found in the dirt was over 700 years old. She put it away and didn’t think much about it. Many years later, she found herself face-to-face with the police at her front door; she had no idea what was happening, but she would soon find out. Her life was about to be drastically affected in a way she couldn’t have predicted. Here’s what happened to Kate Harding 14 years later.

→ Read more at finance101.com
£1 million worth of ‘thruppences’ to be sold to stop coin collecting dying out

£1 million worth of historic silver &ldquo;thruppences&rdquo; is to be sold off in an effort to stop coin collecting dying out in the digital age.

Australia’s embrace of a cashless society has seen coin production at the Royal Australian Mint plummet, with revenues from coin sales down more than 30% compared with last year. While the mint had budgeted for circulating coin revenue of $85m in 2018-19, the mint achieved a result of just $58m, selling 111m coins to the banks, 106m of which were for circulation.

As the old saying goes, ‘there’s no Christmas in coin collecting.’ And local coin shop owner Jeff Spielman is warning collectors not to be fooled by scammers in the Lincoln City area. Spielman, owner of the JS Coins LLC shop, has seen a variety of counterfeit coins and jewelry come through his doors during his tenure in Lincoln City.

→ Read more at thenewsguard.com
Rare 1838 Half-Dollar Coin May Now Be Worth Half a Million

An ultra-rare 1838 half-dollar coin could fetch as much as $500,000 at the Whitman Baltimore Winter Expo at the Baltimore Convention Center on Nov. 14. Known as 1838-O Capped Bust Half Dollar, the coin is one of only nine known to exist, according to numismatic auction house Stack’s Bowers Galleries.

Paul Raynard, 44, screamed “'there's millions – this is the moment we dreamed of!” to best pal Michael Gwynne, 52, when he realised the scale of the find