It’s the most wonderful time of the year… especially if you are in retail and your sales are tripling! I hope to be on time with next week’s news report. Until then, here is what I had planned to say on Sunday. 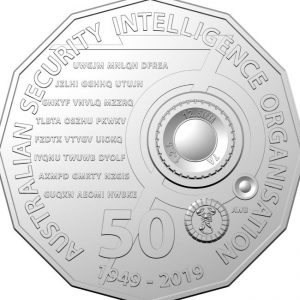 “Coincryption” from the Royal Australian Mint (Image via news.com.au)

The old information security geek became excited when I found out that the Royal Australian Mint issued a coin that had an encrypted message. They also held a contest to see who could decrypt the message.

The coin, called “Coincryption,” was issued in honor of the 70th anniversary of the Australian Security Intelligence Organisation (ASIO). The ASIO is equivalent to the Federal Bureau of Investigation in the United States.

As part of the contest, the person who cracked the code was eligible to receive a one-of-a-kind coin designed to celebrate the anniversary of the ASIO.

To crack the code, you need to use the one-time pad as a key. A one-time pad (OTP) is randomly generated text that, when you apply a specific formula, will reveal each letter. OTPs can be very secure if used only once, and the equation to decode the message is frequently changed.

UPDATE: I found the OTP on the Royal Mint’s website → here.

According to the press report, the decoded message says:

There is no greater honour than the trust of the Australian people or weightier burden than protecting the security of Australia and its people.

If you want an encryption challenge, you can try your skills at Kryptos, the copper sculpture that is outside of the Central Intelligence Agency’s headquarters in Langley, Virginia.

Kryptos contains four messages in the 865 characters carved into the sculpture. Since its installation in 1990, world-wide experts have solved three of the four messages. The last 97 characters, known as K4, remain unsolved.

Since Kryptos is on the CIA grounds, it is off-limits to the public. However, the CIA has made it available on their website. More information about Kryptos, including the messages hidden in the first three panels, is available in this article.

Kryptos might be a good idea for a commemorative coin. Create a clad coin with K4, attach it to a card with information about the sculpture that includes the cipher, and offer a special gold coin to whoever solved the puzzle. Add a $5 surcharge and donate the money to STEM education.

A metal detectorist has said he was "amazed" as a hoard of 99 silver Anglo-Saxon coins that he found in a farmer's field sold at auction for £90,000. The proceeds will be split 50/50 between builder Don Crawley, who unearthed the pennies at the site of a forgotten Saxon church in Suffolk, and the landowner.

Nine silver quarters recovered from the wreck of a sunken ship carrying tonnes of treasure during the California Gold Rush are ready for auction. The rare quarters were recovered in 2014 from the wreck of SS Central America, a steamship that sank on September 12, 1857, while carrying gold and other treasure from San Francisco to New York.

Belgium did it earlier this month, following Finland, the Netherlands, Ireland and Italy Making cash payments is gradually getting easier in Western Europe. As of the beginning of December, it is no longer possible to pay cash amounts like 3,22 or 5,99 euros when you shop in Belgium.

Magill, 55, from Newry in Northern Ireland, gets a 50-month sentence for conspiring to import fake currency.

The Royal Australian Mint has finally revealed the secret message hidden on a “unique and exciting” Aussie coin. In September this year, the Mint made history after releasing the first Aussie coin featuring a secret code.

Sackers scrap metal and waste recycling The haul was made up of some legal tender and some old notes Staff at a scrap metal dealer who found about £20,000 as they cut up a safe to be recycled will donate the money to charity after no-one claimed it.

→ Read more at bbc.co.uk
Copper Dollar, Double Eagle & other coins that are worth a fortune today

Swissmint’s retail website buckled under pressure as demand soared for a commemorative coin featuring the country’s tennis star Roger Federer. A look at some old coins that are worth a fortune today: