After a week of being busier than a one-armed paper hanger, I sat down to write a blog post and found that this was marked as a draft and never published. Sorry for the delay! 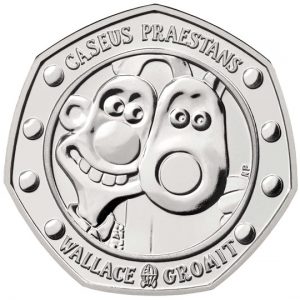 A study in the United Kingdom has shown that the Brits are collectors. Whether they collect coins, stamps, memorabilia, refrigerator magnets, and toys, over 80-percent of Brittons claim to have collected something.

The study that was commissioned by the Royal Mint sampled 2,000 adults and showed that more than 50-percent of the respondents collected coins or stamps, the most in the survey.

Although age was a factor in the type and size of the collection, the study showed that themed coins were more popular with younger collectors than the traditional set building.

When it comes to advancement in electronic payments, e-commerce, and similar conveniences, the UK is no different than the United States. One Bank of England study showed that younger adults are adapting to credit cards and electronic payment options more than their parents and grandparents. The difference is that the average value of the transactions is higher.

In addition to the 1-, 2-, 5-, 10-, 20-, and 50-pence coins, the Royal Mint produces £1 and £2 circulating coins. Brittons are used to carrying these coins and using them for low-value transactions. While many stores will accept micro-transactions using credit cards, the cost structures are different that using coins is encouraged.

Aside from the societal norms that continue to promote coins for commerce, the Royal Mint has done an excellent job promoting coin collecting by producing different designs. They produced 20p and 50p circulating coins that have promoted various aspects of British cultural history. It is common to see weekly stories of a limited edition circulating coins to sell for high values in online auctions.

Not only are these coins accepted by the British numismatic community, but they are also used to promote the hobby more than the sovereigns of the higher-priced collectibles. News reports demonstrate that the British collecting public would instead collect coins about Wallace & Gromit or Paddington Bear than a sovereign.

Rather than embrace change in United States coinage, the numismatic Illuminati would rather bemoan the state of “modern coinage.” They forgot how the 50 States Quarters Program brought back interest in collecting coins. But they were happy when people started showing up at their shops and shows while ignoring the hucksters out there who were selling overpriced packages which has lead to giving the hobby a proverbial black eye.

The situation is understandable. Dealers have to make a living, and it is more profitable to sell Morgan Dollars than it is to sell Presidential Dollars. Unfortunately, the way dealers turn their noses up to the lower-end market is turning away future customers. Collectors have to start somewhere and if it means getting someone interested in collecting National Parks Quarters or encouraging a series of quarters based on cultural icons, then embrace the change. Your future may depend on it!

Half of Brits are proud owners of a collection – including everything from coins and fridge magnets to items from hotels. Stamps, candles and pens also made the list of collectable pieces.

ÇANAKKALE-Anadolu Agency Turkish archeologists have unearthed a 1,800-year coin thought to feature Paris, an ancient figure some have blamed for starting the legendary Trojan War. More historically, Paris may have also founded the ancient city of Parion in the coastal Canakkale province, in Turkey's northwest, near the unearthed traces of Troy.

A hoard of Anglo-Saxon coins discovered in a field by an amateur detectorist has fetched £90,000 at auction – three times its original estimate. The collection, made up of 99 "silver pennies" thought to be 1,000 years old, was found buried on farmland in Suffolk in March 2017.

Massachusetts regulators have taken legal action against Metals.com for allegedly convincing seniors to invest millions of dollars of retirement savings into overpriced precious metals. A Quartz investigation linked the company with a web of Facebook ads and websites that specifically target conservative retirees.

→ Read more at qz.com
Penny for your thoughts: Do Canadians miss the one-cent coin?

In 2012, the federal government—at the time headed by Stephen Harper—began to devise a strategy to take the penny out of circulation in Canada. One of the reasons behind this rationale was simple: the cost of making a new one-cent coin was estimated at 1.6 cents per coin.