I have been a busy week, month, and year. Many of you have stuck with me while Real Life has taken a lot of my time. I appreciate your support. I have more things to write about and will try to do so in 2020.
Resolve to keep happy, and your joy and you shall form an invincible host against difficulties.
— Hellen Keller

News opened for the new year with ancient coins returning to Mexico after previously been legal for trade. 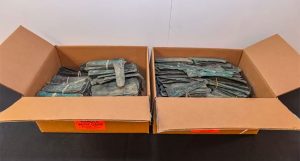 According to the story, Mexico requested the return of 3,500 pre-Hispanic copper coins after discovering its existence in 2013. The coins were obtained by Florida collector in the 1960s, long before the UNESCO convention that turned foreign governments into treasure hunters.

After the coins were taken to Spain for auction, the Mexican government contacted the FBI asking for their help. Allegedly, the collector voluntarily turned them over.

Even though the coins were obtained legally and subsequently legislated into chattel, foreign governments continue to attack United States collectors because they can.

Under the UNESCO convention, numismatic items are the most problematic. When so many examples exist, every coin should not be considered cultural property. Countries can be reasonable and hold back a few examples that would help tell their story, but what is wrong with sharing that story with the world? Does 3,500 coins, most that will never see the light of day again, have to be hidden from the public in Mexico? Would it be against Mexico’s interest to share about 85-percent of that hoard with the world?

Watchers of how countries selectively enforce the provisions UNESCO convention will note that the majority of claims on the alleged numismatic cultural property occurs in the United States or against Americans abroad. Why does the Italian government not claim property rights for all the Roman hoards found in the United Kingdom? Why has there not been claims made against hoards found along the path of the Silk Road during the last few decades?

The only time the UNESCO convention is invoked for numismatics is when someone tries to smuggle coins out their countries, which is reasonable, or in the United States. Why?

US returns 3,500 copper coins that were in use more than 500 years ago

The United States returned a collection of over 3,500 pre-Hispanic copper coins to Mexican authorities in a ceremony in Miami on Monday. The coins were used in what are now Michoacán and Guerrero between the years 1200 and 1500, according to Jessica Cascante, spokesperson for the Mexican Consulate in Miami.

What I see for them is not yet, What I behold will not be soon: A star rises from Yaakov, A scepter comes forth from Yisrael; It smashes the brow of Moab, The foundation of all children of Shet. Numbers 24:17 (The Israel Bible™)

→ Read more at breakingisraelnews.com
Archaeologists find hoard of Islamic coins in Israel: 'It's like a Hanukkah present'

Rare gold dinars from Abbasid caliphate period found inside a juglet in Yavneh Liat Nadav-Ziv, Israel Antiquities Authority A hoard including rare gold coins from the early Islamic period about 1,200 years ago was found during a salvage excavation in Yavneh on Thursday.

To take one and two-cent coins from circulation, such is the idea the Bank of Lithuania will start a discussion on. Retailers, however, see risks in consumer mood over rounding sums up.

→ Read more at bnn-news.com
Counterfeiters passed a lot of bad coins in 1908

Today when authorities warn of bad bills or counterfeit money it's usually 20 dollar bills. In 1908 the problem was bogus coins — silver dollars, dimes and quarters. While it might seem not worth the trouble to create, such a coin could purchase much more than today.