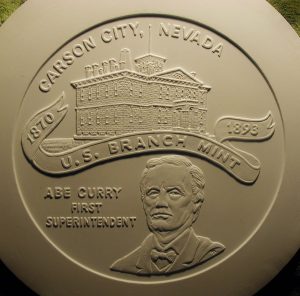 Mold used to make the dies for the Carson City Mint Sesquicentennial medal. Image courtesy of the Nevada State Museum.

This past week, the Nevada State Museum celebrated the 150th anniversary of the United States Mint in Carson City. The Carson City Mint opened in 1870 to strike silver coins using silver from the Comstock Lode.

Although named for Henry Comstock, he did no discover the silver mines in the area. Comstock has the distinction of claiming a stake in the lode before selling his stake for thousands of dollars, an unreasonable sum at the time, and settling in Carson City. Comstock started a few businesses. His brashness and presence lent his name to the discovery.

Comstock is not a hero. He was known for being impatient, careless, lazy, and some accused him of being insane. Comstock committed suicide in 1870, leaving several failed businesses, a failed marriage, and sever debt in his wake.

After the discovery, it was expensive to transport the silver to San Francisco for processing. Nevada politicians lobbied congress for the formation of a branch mint to assay and strike coins. Congress authorized a mint in 1868 for nearby Carson City. The building opened for production in 1870. The Carson City branch mint struck silver and gold coins but in lesser amounts than the other mints making their coins highly collectible and more expensive because of their rarity.

Many consider the coins struck at Carson City to be amongst the most beautiful of all the coins. With the lower production totals, mint employees did not have to rush production, allowing them to create proper strikes. Of course, mistakes happen, and varieties of coins struck at the Carson City Mint are some of the most desirable.

A significant distinction of the coins struck in Carson City is that they bear the “CC” mintmark. It is the only two-character mintmark used on U.S. coins.

Production ended in 1893 with the reduced output from nearby silver mines. The building served as an Assay Office beginning in 1895. It closed following the gold recall of 1933. The State of Nevada purchased the building in 1939.

Today, the building houses the Nevada State Museum, where Coin Press No. 1 continues to strike commemorative half-ounce silver medals every month. There are only four known versions of this coin press in existence and the museum has the only working model.

For the sesquicentennial celebration, the museum struck a commemorative medal for the visitors. Visitors were able to purchase half-ounce silver planchets from the museum’s gift shop and bring them to the Coin Press No. 1 for striking. Because this was an on-demand process, you had to be at the museum to purchase one.

The Mint at Carson City is a symbol of U.S. history. It is where the old west meets modern commerce. From the reports, it sounds like the celebration went well. I hope to be able to visit the museum at some point in time.

The huge coin weighs five kilograms (Picture: The Goldsmiths’ Company/SWNS) A £5,000 coin that weighs five kilos and is big enough to eat your dinner off has been produced by the Royal Mint as part of a tradition going back more than 700 years.

A giant discovery of nearly 70,000 coins from the Iron Age has set a Guinness World Record for being the largest of its kind discovered in the British Isles. Discovered in January 2012, the collection of 69,347 coins was found in Jersey by metal detector enthusiasts Reg Mead and Richard Miles, British news agency SWNS reports.

→ Read more at foxnews.com
Coins and Celebration in Carson City

It was born out of Nevada's silver boom. The Carson City Mint coined our money for decades, until 1893 when it closed…later becoming the Nevada State Museum. But museum curator Robert Nylen told me it’s still famous for the coins: "The coins that came out of Carson City.

→ Read more at ktvn.com
Are these your coins? Kamloops RCMP in possession of multiple coin collections

(Kitco News) U.S. Mint gold coin sales saw a strong recovery in January after the weakest year on record in 2019.

Persistent archaeological treasure hunters have set a new Guinness World Record for the largest coin hoard ever discovered in the British Isles. This treasure story begun in the early 1980s after Reg Mead and Richard Miles read a report about a farmer on Jersey who many years earlier had discovered silver coins in an earthenware pot while pulling out a tree from a hedgerow.

A PORTLAND resident has discovered another 'love token' at Church Ope Cove, prompting theories about what once took place on the sandy shores. Edward Dahl first found a silver sixpence, dating from 1696 during the reign of William III, back in 2018.

It is the second time in history when a coin issued by Latvijas Banka has been recognised the Coin of the Year. The innovative Honey Coin, created by the designer Artūrs Analts, won by a very wide margin, and, quoting the 1 February 2020 press release of the Numismatic News, "the day was sweet as honey" for Latvijas Banka.