Quarantine Update: COINS ON TELEVISION ARE STILL NOT A GOOD DEAL 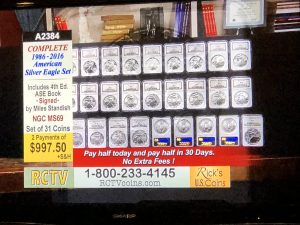 All the little suckers collectors are home captivated by what’s on televison. Let’s see if we can suck them in catch their eyes to separate them from their money sell them common material great coins at inflated great prices!

Since being ordered to stay-at-home, the number of queries about deals for coins from television commercials, infomercials, and the home shopping channels has risen. The number of readers for my article “DON’T BUY COINS ON TELEVISION” has quadrupled in the past week.

The questions are all the same: is it a good buy?

Usually, the answer is NO!

In “DON’T BUY COINS ON TELEVISION,” I compared the offer of a date run of 31 American Silver Eagles each graded NGC MS-69 to a full 34 coin set. I found that the television markup was 50-80% over other alternatives.

The experience with this television con came less than a week after someone came into my shop with a box of overpriced items that he purchased from a home shopping television show and places like the National Collectors Mint. In “The Sad State of Television Numismatics,” I wrote about this experience and some more things to watch out for, including gold-plated tributes that have less than 1-cent worth of gold.

So that you know that this is not new, back in 2011, I wrote about another infomercial that claimed the Presidential $1 Coins were “vanishing from circulation at an alarming rate” because collectors are hoarding them. It was another show where the statements made the overpriced items appear too good to be true.

The worst part of both television pitches is that they both used respected numismatic authors as props. While neither endorsed the products the announcer was pitching, their presence was an effort to give the pitch an air of legitimacy.

I know it is difficult for some to be home during the day. Many of us are used to working and not having this much time on our hands. But it is not the time to stop thinking about getting the best value out of your collection. If you see a pitch for coins on television that intrigues you, then stop, take notes, and do some research before picking up the phone or visiting that URL.

What do the price guides say about the price? If the items are in slabs, go to the price guides for NGC or PCGS and find out what they say the coins should be worth. Want an independent opinion? Check the prices with the Greysheet Price Guide or the Numismedia Fair Market Value Price Guide.

Are there other purchasing options? Use a search engine to search for others who may be selling the same items. Check online auction sites, like eBay.

If you do a little due diligence, you may find that you can purchase the same or similar numismatics at a better price. You might be able to find something with a better grade also at a lower price.

Please do not overpay for your collectibles. If you regret your purchase, then it takes the fun out of collecting. We have enough problems, don’t compound them. Relax and enjoy your collection!