Even as some areas of the country are easing quarantine restrictions, the best way to prevent the spread of COVID-19 is to stay home. Although the United States has 4.25-percent of the world’s population, it has 33.19-percent of the reported cases of the disease with a death rate of 5.77-percent.

The dangers of the novel coronavirus are not only to older people, who dominate the hobby, reports that younger people who may not have shown symptoms have experienced strokes. Even the youngest children are showing symptoms that resemble Kawasaki disease.

I know it is a financially and mentally tough situation. The business I worked hard to build was beginning to break through when Maryland ordered non-essential companies to close. When I am not working alone to organize a warehouse, I am finding solace in numismatics.

I found four entries to my Quarantine Reading List that are interesting and have taught me something. The best thing about each of the books is that each is available online. 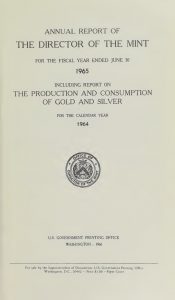 Other than the formation of the U.S. Mint, there is no single seminal event that marks its history than the elimination of silver from circulating coinage. It is the dividing line between what is considered classical coinage and the modern era.

When you find information about the era, it discusses the discussion and the result that created clad coinage. But when you dig into the policy, there is a bigger story. As with a lot of history, the details help us understand the road to where we are today.

The road to modern coinage began with changes in the laws and policies at the U.S. Mint. The one place that every law and policy announcement documented is in the “Annual Report of the Director of the Mint Fiscal Year June 30, 1965.”

What makes this over 300-page document interesting to read are the details that are no longer present in present-day Annual Reports. The text reprints congressional testimony, reports, announcements, policies, and the laws that affected the U.S. Mint. Since this report covers the last half of calendar year 1964 and the first half of calendar year 1965, it is ideally situated to document the government’s action from silver to clad coinage.

The first numbered page begins with the text of the Coinage Act of 1965.

For those that like charts and data, you can go to page 201 to read the section on “The World’s Monetary Stocks of Gold, Silver, and Coins in 1964.” It is a look at circulating coinage of the entire world for 1964. It is a fascinating view that the U.S. Mint stopped doing in 1972. 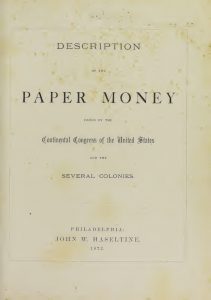 While looking for records about colonial currency, I stumbled on an electronic copy of Description of the Paper Money Issued by the Continental Congress of the United States and the Several Colonies by John W. Haseltine, published in 1872. Haseltine was a dealer, auctioneer, and cataloger of many collectibles, including coins. Many of his catalogs were sparsely illustrated, but the listings have proven invaluable.

Paper Money Issued by the Continental Congress is one of those catalogs. Its contents are nothing more than lists of colonial currency issued in the 18th century. It is a useful reference for anyone with interest in the currency of that era. Download a copy → here.

If you want a colonial currency reference that is more extensive, you can download The Early Paper Money of America by Eric P. Newman → here. 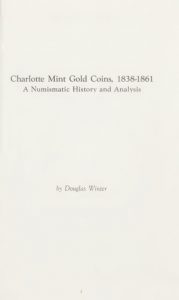 Did you know that the Charlotte Mint was the first branch mint outside of Philadelphia? Authorized in 1835 following the gold strike at the Reed Gold Mine, it became operational in 1838. The Charlotte branch mint was closed when the building was seized in 1861 by the Confederacy during the Civil War.

When I wanted to learn more about the Charlotte Mint, I was pleasantly surprised to discover that Charlotte Mint Gold Coins, 1838-1861 by Douglas Winter is available to read online or to download. The book is an easy read with illustrations, and a catalog of the coins struck at the mint. You can find the book → here.

The branch mint in Dahlonega, Georgia, opened after Charlotte also to mint gold coins from a nearby gold strike. Dahlonega was also seized by the Confederacy in 1861 and did not reopened. 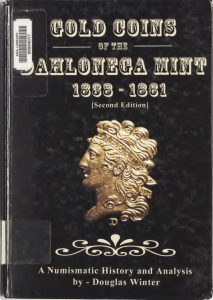 Gold coins minted at Dahlonega carry the “D” mintmark. Since Dahlonega only struck gold coins and gold coins were not struck in Denver, this has not been an issue. To read about the colorful history of this branch mint, read Gold Coins of the Dahlonega Mint 1838-1861, Second Edition, by Douglas Winter. The book is similar in format to Winter’s Charlotte book. You can find this book → here.

Winter did write books about the gold coins struck at the New Orleans and Carson City Mints, but I had not read either book at the time of this writing. These books and more free resources are available through the Newman Numismatic Portal.

COVID-19 statistics are from Statistia.