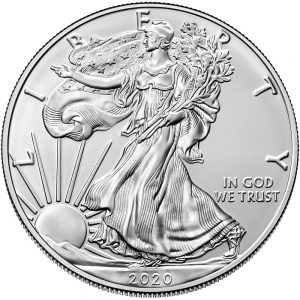 Is it Sunday already?

This past week, the numismatic world was greeted with the news that the Philidelphia Mint struck a limited number of American Silver Eagle bullion coins to help fill the demand.

The U.S. Mint produces all bullion coins without mintmarks. In most cases, it is impossible to tell which mint struck the coins. An exception is the 2015 (P) American Silver Eagles. Collectors and the grading services have been trying to figure out where the green monster boxes came from by examining the serial number and other clues. In 2015, Philadelphia struck just under 80,000 bullion coins. Those handling monster boxes noticed a difference in the packaging and quality.

With that knowledge, the third-party grading services will add a special label noting that the coins were struck at Philidelphia only if the monster box sent for grading has the proper label and seal.

Of course, the price gougers are out in force. Most reputable companies are selling MS-70 graded “emergency” coins at around $250. That is about $200 over a “First Strike” or “Early Release” graded coins. One online seller is offering a pre-sale of the “emergency release” coins in MS-70 PCGS slabs with John Mercanti autographs for $595.

Remember, if the listing says “pre-sale” it means that the seller does not have the coins in inventory.

Should you buy gold coins?

With central banks spraying unprecedented amounts of printed money at the global economic system, it’s little wonder the gold price soared by 18% in the six weeks following the stockmarket meltdown. All the extra money sloshing around means the chances that consumer price inflation will take off and erode the value of your cash have risen sharply.

(Kitco News) – The last time the U.S. Mint sold this many platinum coins, President Bill Clinton was being tried by the U.S. Senate and Spongebob SquarePants was premiering on Nickelodeon. As of last month, the U.S. Mint said sales of the 1 oz platinum Eagle in 2020 reached 56,500 oz.

A veritable gold mine of silver coins which had been hastily stashed inside a church in a ceramic jug hidden by a blind Polish priest over 300 years ago has been unearthed by workers removing rotting floorboards in the blind priest’s former church.