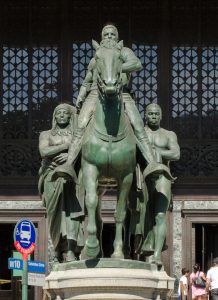 Since Roosevelt’s death, Fraser was asked to design three different statues honoring the 26th President with themes picked by the sponsors. The theme was chosen for this statue by the Roosevelt Memorial Association. The statue would honor Roosevelt and the indigenous people in the Badlands of South Dakota and the Africans he met during his post-presidency safari. They were meant to be allegorical figures, not real people.

Theodore Roosevelt was a fascinating personality. TR was fond of the Badlands area, the area of the Dakota territory around the Little Missouri River. In his autobiography, Roosevelt admitted that he used his trips to the Badlands as an escape. The trips started after the death of his first wife, Alice, who died within days of giving birth to their only child.

Roosevelt stopped talking about Alice after her death. Until he wrote his autobiography, the last statement Roosevelt made about Alice was in his diary, where he wrote, “The light has gone out of my life.” Some scholars believe that Roosevelt’s trips to the Badlands were his attempt to combat depression or post-traumatic stress following Alice’s death.

Following his presidency, Roosevelt went on a safari in Africa and a trip through Europe. In Africa, Roosevelt’s safari was a research project sponsored by Andrew Carnegie that would bring back specimens for the Smithsonian Institue and the American Museum of Natural History.

His guide through Africa was a British national RJ Cunninghame. Aside from his knowledge of the region, Cunninghame knew many natives who can lead them around the land. In each of the countries, the local guides were natives.

In his autobiography, Roosevelt would credit the native people for helping on his trips. It was clear that Theodore Roosevelt would not have been associated with these people in other areas of his life. Still, his writing demonstrated a lot of respect for their guidance. 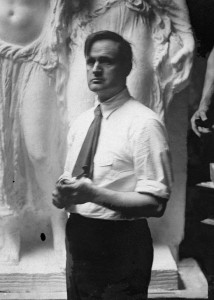 Fraser was consulted many times by the Roosevelt Memorial Association. It was due to his being an accomplice to Roosevelt’s “pet crime,” the redesign of the nation’s coinage. Fraser, who was an assistant to Augustus Saint-Gaudens, understood the imagery the President wanted that became the inspiration for the Buffalo Nickel.

All of Frasier’s work has many elements that have to be studied to be appreciated. Numismatists can see his attention to detail by studying a Type 1 Buffalo Nickel with a loupe. The detail gives the coin a lot of character that makes it an appealing collectible. When the U.S. Mint tried to recreate the design for the 2001 commemorative coin, collectors were not satisfied with the flatter image. 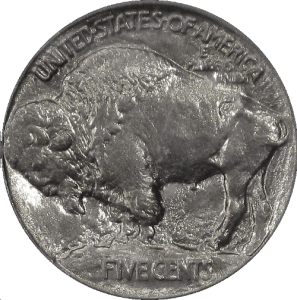 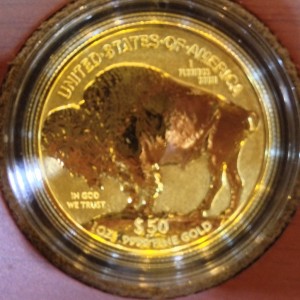 Many of the statues in tribute to the 26th President show Roosevelt on a horse. Fraser was consulted about two other Roosevelt memorial statues. The statue Fraser proposed that is now on Roosevelt Island in New York’s East River was similar in design to the Equestrian Statue at the Museum of Natural History. The other was a statue to be part of the Theodore Roosevelt Island in the Potomac River near Georgetown. It depicted Roosevelt on a horse without the guides. Fraser died before funding for the statue was realized.

Fraser’s image for the statue was clear. It was the two indigenous people working to support Roosevelt’s adventures. These are not racist images, even when it has been badly misinterpreted by some media who call the person to Roosevelt’s left an African-American.

Unfortunately, the current society has lost the ability to reason beyond the surface at allegorical symbols that are supposed to honor rather than demean. It takes a higher sense of forethought to understand what is being depicted. A value that is lacking today. Understanding the history of the man and the imagery offered by Fraser something to be admired. It is a work of art that needs to be preserved and not run over by a politically correct freight train.