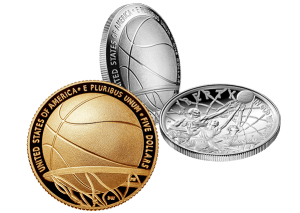 It is always fun when there is something numismatic to report. This week, the U.S. Mint released the Basketball Hall of Fame Commemorative Coins. The curved or domed coins of the program feature a basketball going into the basket on the reverse or convex side. The reverse features three players reaching for a rebound.

Introductory pricing for the silver and clad coins expire on July 6. After July 6, the price will go up by $5. The market value of the gold determines the gold coin’s price.

Previously, there was a discussion of a colorized coin. According to the U.S. Mint, it will be available in the future.

The Naismith Memorial Basketball Hall of Fame is unique amongst sports halls of fame in that enshrinement is not limited to professionals or college players. Inductees include college and professional basketball players, teams, coaches, and broadcasters. From my undergraduate alma mater, the University of Georgia, Theresa Edwards and Katrina McClain are honored alongside Dominique Wilkins.

From Senda Berenson Abbot, the “Mother of Women’s Basketball,” to Pat Summitt, the most successful coach of women’s college basketball, the Hoop Hall presents basketball beyond the NBA.

Although it has been over 20 years since I visited the Hoop Hall, I would recommend that you visit. Maybe you could consider a trip when the Hall reopens.

As It Were: Early counterfeiters made easy money in Columbus

David Lowe, 55, stumbled across the ‘weirdly relevant’ find among a pile of rubbish while searching land near Rothbury.

→ Read more at northumberlandgazette.co.uk
Why the tiny Pacific nation of Tuvalu wants a bigger share of the designer coin market

As the coronavirus pandemic hits economies around the world, the tiny Pacific nation of Tuvalu has carved out a lucrative niche — producing designer coins featuring the likes of Star Trek, John Wayne and even Duff Beer.

→ Read more at abc.net.au
Study reveals the Pantone references of banknotes around the world

Money.co.uk has released a new study looking into the different aesthetic attributes of currency on a global scale – even looking into the Pantone references for each too. The results display certain patterns in use of colour, the appearance of different famous people or animals, and proposes what a global currency could look like.

The Brasher Doubloon, the first gold coin struck in the U.S., is being offered privately at a $15 million asking price, according to numismatic adviser Jeff Sherid. His firm, Los Angeles-based PCAG Inc., is marketing the coin on behalf of a collector he would only identify as a former Wall Street executive.

→ Read more at dailynews.com
10 Rarest Coins In The World

Nothing gets a coin collector’s blood going like hearing about a rare coin.

→ Read more at worldatlas.com
The First US Gold Coin Is Expected to Fetch a Staggering $15 Million in a Private Sale

The Holy Grail of coins has just popped up for sale. The 1787 Brasher Doubloon was the first gold coin struck in the US and represents one of the most important pieces in America’s numismatic history.