Queen of the Collection 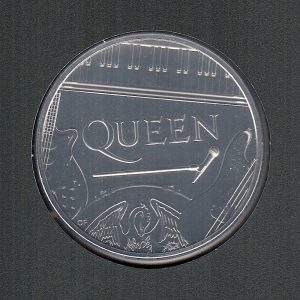 Reverse of the £5 Queen Coin

Growing up in the 1970s allowed me to enjoy the height of the Progressive Rock era. Today, the music is called Classic Rock and is popular with Baby Boomers and our offspring. One of those popular bands was Queen.

Queen’s frontman and principal writer was Farrokh Bulsara, better known by his stage name Freddie Mercury. Mercury was talented, charismatic, and a showman whose first big hit “Killer Queen” put them on the radar of young rockers in the 1970s.

In 1975, Queen released A Night at the Opera with the iconic “Bohemian Rhapsody” that always appears on the Top 10 lists of all-time songs. A Day at the Races followed, sometimes considered Part 2 to A Night at the Opera. Next was News of the World featuring “We Will Rock You” and “We Are the Champions” that continue to be featured as anthems in sports stadiums.

There is also the phenomenal performance by Queen at the 1985 Live Aid concert at Wembley Stadium.

The coins are available as a half-ounce silver proof and a £5 uncirculated coin with limited edition slipcases. The Royal Mint partnered with the Royal Mail to produce a coin cover.

Coin covers, known as Philatelic Numismatic Covers (PNC), are covers with coins or medals encased and usually postmarked on the First Day of Issue of the stamps. PNCs are popular in Europe. The colorful cache with the stamps and coins gives the collectible more context and appeal. 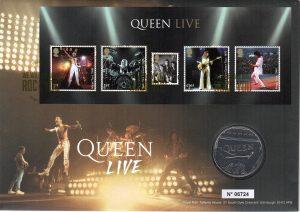 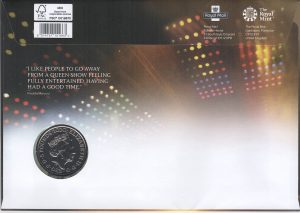 Back of the Coin Cover honoring Queen 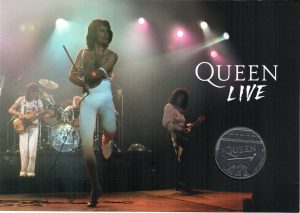 Inside the cover is a card that holds the coin. 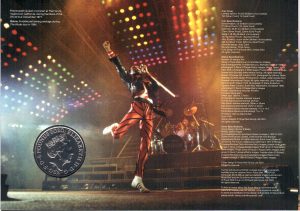 Back of the insert Card of the PNC Honoring Queen

My collection contains every coin cover issued by the U.S. Mint, some issued by private companies, and several by the Royal Mint and Royal Mint with global interest topics. When I discovered that they issued a coin cover with the Queen coin, it was an opportunity to add a great collectible to my collection.

The covers are a great way to collect something numismatic that ties to other interests. Aside from classic rock, I noticed that the Royal Mint and Royal Mail has two limited edition covers celebrating Sherlock Holmes. I first read Arthur Conan Doyle’s The Hound of the Baskervilles for a college literature class. I thought it was fantastic. When discussing the book, the professor said that Doyle wrote many short stories featuring Holmes. As a poor college student, I was able to find an affordable two-volume set of Doyle’s 56 short stories in a used bookstore. Later, I read the four Sherlock Holmes novels.

As you can see, the coin covers add additional context to the collection. It bridges numismatics with other subjects that allow the enjoyment of both. In fact, I was listening to the Top 700 countdown of the 1970s hits on SiriusXM’s 70s on 7 channel that reminded me to write about the cover.

For the record, the listeners of the 70s on 7 voted Queen’s “Bohemian Rhapsody” as the Number 1 song of the 1970s. “We Will Rock You/We Are The Champions” was Number 10.