It has been two weeks and two days since my last Weekly World Numismatic News update. It was a case of Real Life™ getting in the way. The launch of my books also added to my time. But the news continues. 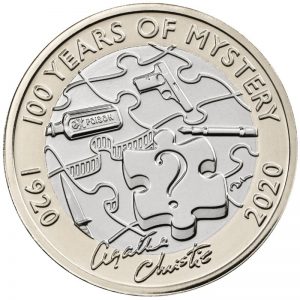 A brilliant uncirculated version of the new £2 coin, which features jigsaw pieces and a replication of Dame Agatha Christie’s signature (The Royal Mint/PA)

News in the numismatic world of the United States has focused on the U.S. Mint. First, the U.S. Mint announced that they have partnered with the Royal Mint to collaborate a British coin and U.S. medal to commemorate the 400th Anniversary of the landing of the Mayflower in the New World. Response from the U.S. collecting public ranged from tepid to wondering if this is the best these two mints can do.

In the meantime, the Royal Mint issued a £2 coin commemorating the 100th Anniversary the publishing of Agatha Christie’s first novel, The Mysterious Affair At Styles. The exciting design featuring a puzzle with a missing piece and implements from the novel had several Coin Collectors Blog readers wondering why the U.S. Mint could not produce something similar for American literature.

Then there was the announcement that the late owner of the Utah Jazz amassed a collection of 1,600 quality coins that is estimated to be worth about $25 million. Larry H. Miller, an entrepreneur from Salt Lake City, was a fixture of the city’s business scene for his business and his support of professional sports. Miller died in 2009 at 64 years old, leaving behind the collection that nobody other than his family knew about.

The Larry H. Miller Collection, which includes an 1804 Draped Bust Dollar, will be auctioned by Stack’s Bowers Galleries later this year. The proceeds from the auction will go toward constructing a children’s hospital in Lehi, Utah, a city south of Salt Lake City.

The news of the Miller Collection appeared to excite more people in the collecting world than the other stories. Although the other coins are obtainable to the average collector, numismatic rubberneckers watch the rarities that most cannot afford.

We should be collecting stories with the coins. Without the stories, the coins are just pieces of metal with designs. Yes, the 1804 Dollar has a heck of a story, but very few can afford to collect that story. But show me someone who collects coins based on comic book characters, historical humans, historic events, sports themes, or has created a theme that tells their story, and you will be showing me someone who is enjoying their collection.

WASHINGTON – The United States Mint and The Royal Mint (United Kingdom) have collaborated to create two limited-edition sets marking the 400th anniversary of the Mayflower voyage.

→ Read more at metrowestdailynews.com
Why Gold Prices Could Stay High

As the price of gold reached a record above $2,000 in August, gold-backed exchange-traded funds attracted new assets for the ninth consecutive month, although the pace slowed, according to new data released on Wednesday by the World Gold Council.

New £2 coins celebrating 100 years since Dame Agatha Christie’s first novel was published are being put on sale by the Royal Mint.

Editor's note: This article is a part of a series reviewing Utah and U.S. history for KSL.com's Historic section. SALT LAKE CITY — For years until his death in 2009, Larry H.

→ Read more at ksl.com
Has Gold Made You Rich? The IRS Wants Its Share | The Motley Fool

Gold has had a fantastic year so far in 2020, with its price climbing from around $1,500 per ounce at the end of 2019 to briefly above $2,000 per ounce recently. That's put the cherry on top of a nice five-year bull market that has seen the yellow metal almost double in price.

Anyone who likes to see a new production date on their coins is set for a disappointing decade. The Royal Mint has no plans to make new 2p or £2 coins for the next 10 years.