The narrative about the 2020 numismatic market has been consistent across the media. These reports claim that hat collector coins are selling but at less than enthusiastic rates. Dealers are reporting that bullion coins dominate the market, primarily online. And everyone has read stories that the rare coin market is as healthy as it has ever been. 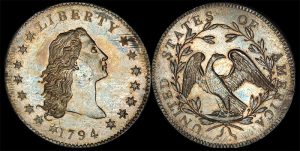 Within that narrative, two of the rarest and most expensive coins did not sell within the last month. The finest-known 1794 Flowing Hair silver dollar, one of the first coins to be minted by the United States in 1794, failed to sell. Purchased in 2013 by Bruce Morelan, Legend Auctions tried to find a buyer at a recent auction in Las Vegas. The coin had a pre-sale estimate of $8-9 million but failed to find a buyer with an opening bid of $7 million.

A few lots later, the Dexter Specimen Class I 1804 Draped Bust Dollar, recognized as the finest known, failed to sell. The auctioneer lowered the opening bid to $3.2 million and still had no interest.

Although the top of other collectible auctions has seen lower prices, the drop is not as significant as being demonstrated with numismatics. It has become common for art to sell for over $1 million that it no longer makes the news. But few are selling at record prices.

Auction watchers are reporting that rare and scarce items are selling at 20-50 percent over their previous prices. Sports collectibles and other memorabilia are amongst the hottest collectibles. Simultaneously, these same watchers report that automobilia, pottery, and numismatics are not generating the same interest.

Analysts are not trying to explain why the market shifts noting that the COVID-19 pandemic has affected everything. One analyst wrote that some markets see the benefit of material once locked up in collections has surfaced to generate money for the sellers. The market has not kept pace. It is assumed that the buyers are not financially capable of purchasing at the prices being demanded.

It has become a cliché to call these “unprecedented times.” For the auction predictors, the pandemic’s effect has most trying to understand what it means for the markets. We will see if it carries into November when Stacks-Bowers tries to auction the Stickney-Eliasberg 1804 dollar.

An exceedingly rare American coin up for auction turned out to be chump change.

→ Read more at nydailynews.com
Scores gather to collect ‘gold coins’ on roadside in TN, except it wasn’t gold

Residents of Hosur in Tamil Nadu's Krishnagiri district were recently forced to learn a valuable lesson — All that glitters is not gold. On Friday evening, close to 4 pm, residents who were passing by Bagalur-Sarjapur road, suddenly noticed some coins glittering on the muddy sides off the main path.

MIND-BLOWING photographs from the Royal Mint's archive give a rare look at its 1,100-year-long history. The images have been revealed by the government-owned mint to celebrate its first-ever coin released to commemorate itself.

→ Read more at cbc.ca
Top 5 Rare Coin Investment Considerations: Is it Right for You?