One of the nice aspects of a new year is all of the new coins that become available. Every major mint starts the year with new bullion products, commemorative coins, and other non-circulated legal tender coinage to keep collectors interested.

For collectors, it is a lot of fun. 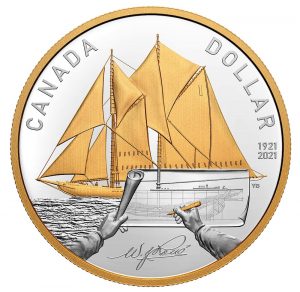 In Canada, the Royal Canadian Mint is celebrating the 100th anniversary of the Bluenose schooner. The Bluenose was a fishing and racing schooner that was revolutionary in its design and became the symbol of Nova Scotia before being a symbol of Canadian heritage.

Although the Bluenose launched in 1921, it did not appear on the Canada 10-cent coin until 1937. Since then, the Bluenose appeared on every 10-cent coin except for 1967 when Canadian coins were redesigned to commemorate the 100th anniversary of the Canadian Confederation.

The Royal Mint has started the year by issuing commemorative sovereigns, Britannia bullion coins, and the yearly Trial of the Pyx. Although modern technology makes the Trial of the Pyx unnecessary, it is an exciting part of Royal Mint history that deserves celebration.

Over in New Zealand, it looks like they are having more fun with coins. New this year are the Chibi Collection of the Lord of the Rings characters, DC Comics superheroes, and more. Although the New Zealand Mint designs and strikes these coins, they are issued under the Niue government’s authority. The New Zealand Mint also strikes coins for the Cook Islands. Both are self-governing states in free association with New Zealand.

The U.S. Mint, whose output is the most restrictive of the world mints, has issued the American Silver Eagle Proof coin and the new American Platinum Eagle Proof. The American Platinum Eagle Proof series celebrates the First Amendment to the United States Constitution, starting with the Freedom of Religion. Also available is the Christa McAuliffe Commemorative Silver Dollar. Later, the U.S. Mint will issue the National Law Enforcement Memorial and Museum commemorative coins.

Finally, the U.S. Mint has issued the last of the America the Beautiful Quarters honoring the Tuskegee Airman Historical Site. The U.S. Mint will produce a redesigned quarter for the balance of the year. The Prominent American Women Quarters will begin in 2022.

It is a fun time to be a coin collector!

The Reddit-fueled run-up in silver prices might be stalling, but the U.S. Mint said it is still rationing its sales of silver coins because of “continued exceptional market demand,” as well as limited supplies and manufacturing capacity.

An Israel Defense Forces soldier discovered a rare 1,800-year-old coin during a training exercise, the Israel Antiquities Authority announced on Monday. The coin features an image of the head of the Roman emperor Antonius Pius and was dated to 158–159 CE.

→ Read more at timesofisrael.com
More than 650 silver Roman coins found in a jug in Turkey

Details of a "very special" haul of 651 Roman coins found in the ancient city of Aizanoi in Turkey have been released by researchers behind the discovery. The silver coins were found in a jug during archeological excavations led by researchers from Pamukkale University, according to a press release from the university.

You might have a coin worth literally thousands in your pocket right now. No, not like that Simpsons episode where Mr Burns tries to steal a trillion dollars: an actual, real coin that you could buy something with that is secretly also worth plenty more than face value to a collector.

CHICAGO: The US Mint announced this week that it will issue a Silver Dollar coin to commemorate Christa McAuliffe, a teacher and a civilian astronaut of Lebanese heritage who died on the Challenger Space Shuttle when it exploded minutes after taking off from Cape Canaveral in Florida on Jan.

The discovery of nine Roman coins found in Norfolk has been declared as treasure.  Yvonne Blake, area coroner for Norfolk, opened the treasure inquest into the find at Norfolk Coroner's Court earlier this month.