Some noticed that I did not post a Weekly World Numismatic News last week. It is nice to see that so many readers are paying attention. This week, I will combine the news of the last two weeks with some highlights.

We Know Who Owns the ’33 Double Eagle 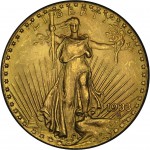 The 1933 Saint-Gaudens Double Eagle is arguably the world’s most famous coin. The only coin of its type legal to own sold for $7,590,020 in a Sotheby/Stack’s auction to an anonymous buyer in 2002. We learned that the owner is shoe designer Stuart Weitzman and will be selling the coin along with two extremely rare stamps at an exclusive auction. The auction will include a rare plate block of the famous Inverted Jenny stamp, the holy grail for stamp collectors. Sotheby’s is estimating the coin’s value at $10-15 million. I predict it will sell for over $12 million.

A rare gold coin with the portrait of King Edward VIII sold for £1 million. King Edward VIII was the shortest-serving monarch of the 20th century. He abdicated the throne 11 months after his coronation to marry a twice-divorced American woman. At the time, the British people felt that the divorces and her ex-husbands were living as an insult to the Church of England. Rather than fight the church, Edward gave up the throne. During his reign, the Royal Mint struck only three £5 gold coins and never circulated. The sale makes this coin the most expensive British coin.

A Britannia of Color 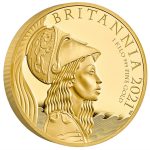 Britannia, the female allegorical symbol of Britain, is depicted on bullion coins as a woman of color. Early in U.S. coin history, Liberty has appeared in ways similar to Britannia. See the image on the Seated Liberty Dollar for an example. Following the United States’ use of a woman of color to represent Liberty, the Royal Mint mint designers produce their own. The new designs are being lauded in the cynical British press for their art and its symbolism. The Royal Mint notes that Anglo-Saxons do not dominate British territories and members of the Commonwealth Realm. It is important to understand that the coin was planned and designed before the Royal Family’s recent controversies.

In case you missed it, the 2019 Apollo 11 50th Anniversary of the Moon Landing Commemorative five-ounce silver proof coin win the prestigious Coin of the Year competition. World Coin News sponsors the annual competition. Nominations, reviews, and voting are held the year following the coins’ issue. They announce the winner the following year. Aside from winning COTY, the coin won the Best Contemporary Event Coin and Best Silver Coin categories. It is one of the best designs by the U.S. Mint in recent years.

An exceptionally rare gold coin for King Edward VIII's short-lived reign is tipped to sell for more than £1million. The £5 coin with a bust of the controversial monarch on one side was struck but never put into circulation as he abdicated after just 11 months on the throne.

S otheby’s New York is pleased to present Three Treasures – Collected by Stuart Weitzman, a dedicated live auction of three legendary treasures from the personal collection of the renowned fashion designer and collector.

→ Read more at sothebys.com
7 rarest old coins including London Mint sovereign worth up to £25,000

COIN collectors or people who’ve inherited old change could be sitting on a small fortune. But as the rarest coins are all from before decimalisation – the switchover to the currency system we use now – you won’t find them in your spare change.

→ Read more at thesun.co.uk
Swedish Viking hoard: how the discovery of single Norman coin expands our knowledge of French history

In the autumn of 2020, I was contacted by the field archaeology unit of the Swedish National Historical Museums, who are also known as the Archaeologists. They were excavating at a Viking-age settlement at Viggbyholm just north of Stockholm.

→ Read more at theconversation.com
Question marks over rare Bermuda coin up for auction in the UK

A rare Bermuda coin is expected to fetch thousands of dollars when it goes up for auction next month. The coin, which may have been minted as early as the 17th century, was found by a metal detectorist in Kent in the UK in 2019.

→ Read more at royalgazette.com
For The First Time, The Royal Mint Issues A Coin Featuring Britannia As A Woman Of Colour

The helmeted warrior Britannia has personified the nation, engraved on coins holding a trident and shield with the symbolic and patriotic lion by her side, for more than 2,000 years. Give or take the odd tweak, she’s remained untouched with the passing of time while society and all those around her have altered.

→ Read more at vogue.co.uk
Ancient Biblical Scrolls and Rare Coins of ‘Immeasurable Worth for Mankind’ Discovered in Desert Cave

Dozens of rare parchment fragments that are over 1,800 years old have been found in a remote cave in the Judean Desert. Israeli Antiquities Authority

→ Read more at goodnewsnetwork.org
Stamp and coin auction house Mowbrays sees new hobbyists 'coming out of the woodwork' after lockdown

Supplied John Mowbray, the owner of Mowbray Collectables, says sales at the Kapiti Coast stamp and coin auction house are up 30 per cent over 2019.

Benjamin Franklin’s Libertas Americana, one of the most sought-after American medals of all time, will be on display for one day only at Sarasota Rare Coin Gallery on Saturday, March 20, 2021 from 9 a.m. to 4 p.m.Jeff Garrett, Senior Editor of the Guidebook of United States Coins (Redbook), will be on hand to present the medal.