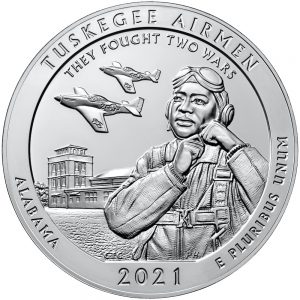 In a few days, the U.S. Mint will release the last of the five-ounce silver America the Beautiful Quarters. The ATB series was a follow-up to the 50 State Quarter Program to honor the nation’s national parks and forests. The order of the program was determined by the date the area became a national park or forest.

The Tuskegee Airman National Historic Site in Tuskegee, Alabama, became a registered historic site on November 6, 1998. Formerly Morton Field, the site was the Tuskegee Airmen’s base and training center, the only African-American division of the U.S. Army Air Corps during World War II.

The end of the ATB quarters also ends the corresponding five-ounce hockey puck-sized bullion coin issues. The big coins are popular with investors and some collectors.

Now that the ATB quarters program has ended, a reverse celebrating George Washington’s crossing the Delaware River will replace the reverse for the rest of 2021. In 2022, the quarters will feature prominent women in United States history. The program will last until 2026, when the quarters’ design will celebrate the American Semisesquincentenial (250 years).

And the law that extended the circulating commemorative programs also includes the provisions for the U.S. Mint to create five-ounce silver hockey puck-sized coins from almost any program.

In the midst of one of the most comprehensive conservation projects currently taking place in Israel, archeologists in Jerusalem’s Old City discovered a Tyre coin, believed to have been used to pay the Temple tax by pilgrims making their way to the Temple for Passover, Shavuot or Sukkot.

Indigenous men and women who have served in the military have been commemorated through Australia’s newest circulating $2 coin launched by the Royal Australian Mint yesterday, 30 March.

Gold coins cast a spell. The pile of coins found in a wall in Caesarea and now displayed in a glass case at the Israel Museum in Jerusalem begs questions.

→ Read more at haaretz.com
Here's How The Pawn Stars Got To Keep A Stolen Item They Purchased