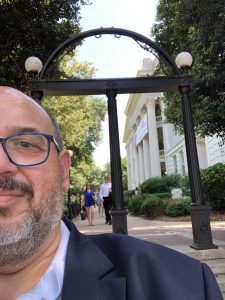 Your humble blogger in front of The Arch at the University of Georgia. The last time I was there I had hair!

As a numismatic blogger, I try to limit the posts to numismatic-related issues. Sometimes, it is necessary to bring the non-numismatic issues into the discussion. The rest of this post is going to cross over into an area some will disagree. But I think it is necessary for the safety of the community.

This past week, I had to make a trip to Georgia for business. The trip required a flight from Baltimore to Atlanta. Travelers must follow TSA and the FAA rules for safety, including masks in the airport and on planes.

Unfortunately, the wearing of masks became a political issue. It’s not. It’s a mask. The idea of the mask is to protect you and to protect others. Masks are an inexpensive tool to reduce the spread of the virus. Nothing else!

During this trip, I learned the difference in attitudes with different people in Baltimore and Georgia. While at BWI Airport, the less than the capacity crowd was very diligent with their masks. Very few people were leaving noses uncovered, and one person politely asked me to replace my mask after taking a sip from my water bottle. It was a sense of community caring, not punitive.

Hartsfield-Jackson Airport was a different story. The number of people prevented moderate social distancing. Everyone packed into the transport trains, and the mask-wearing varied from covering the chin to uncovering the nose.

Arriving in Athens, Georgia, home of my alma mater, the University of Georgia, the scene was different. Walking the streets and the time I spent on campus, you can tell the difference between the students and everyone else. The students were wearing masks and keeping distances. Students working in local businesses were more diligent than the parents that were in town for commencements.

I had the opportunity to discuss the situation with some of the students. They relayed stories about how the students did not take the pandemic seriously until it spread on campus.

The problems are not with the students and those concerned about public health. The problems are with those who see masks as a conspiracy. Many numismatic dealers have indicated they are on the side of the conspiracy theorists.

The attitude of these dealers, mostly older and obstinant, can turn the re-opening of the hobby into a disaster.

You might want to question my assertion because of the presence of the vaccines. While the vaccines provide immunity against the SARS-CoV-2 virus that has plagued the United States for more than a year, combating the variants is uncertain. Research has shown that the vaccines will fight some of the variants, but not all of them.

As people travel, the variants will spread with the people that will carry them. The only way to prevent the variants from ruining the re-opening is to get serious about wearing masks.

Yes, wearing masks suck. As someone with allergy and respiratory issues, wearing a mask is very uncomfortable. During the workday, I will take my dog for a walk when I need to take off my mask. I know that for a year or two discomfort, we can re-open society and hold shows again.

We need to come together as a community and be leaders for the country. Numismatics has the chance to lead. By leading and acting as we care for one another, we can look like heroes to the rest of the world and possibly attract new members.

Who Should We Honor on Our Money?

Coins celebrating the writer and poet Maya Angelou, left, and the astronaut Sally Ride will be issued next year as part of the U.S. Mint’s American Women Quarters Program.United States Mint

A silver coin found in Maryland after almost 400 years provided a big clue for archaeologists searching for St. Mary's Fort — one of the earliest English settlements in the New World. The coin, a silver shilling with a portrait of King Charles I, was created by the royal mint in the Tower of London back in England at around the time the fort was settled in 1634, according to Travis Parno, the director of research and collections at the Historic St.

WITH most of us spending more time at home, you want may to dig through your spare change for rare and valuable coins. If you spot one of the top six, then you could end up making a tidy profit, as they're worth up to $10,633 each.

→ Read more at the-sun.com
Coin Collectors News
news.coinsblog.ws
♦ S.S. Central America Sunken Treasure World Gold Coins in Goldberg Auction (May 21, 2021)
♦ YN Scholarships for 1st Coin University Program in San Francisco (May 21, 2021)
If you like what you read, share, and show your support