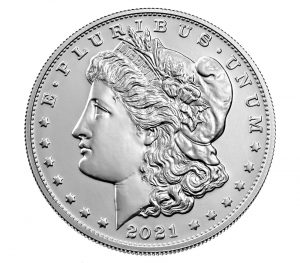 The U.S. Mint announced the new ordering procedures for upcoming silver products and that there will be changes to the bulk purchase system. Most collectors met both news items with a collective yawn.

For many years the U.S. Mint has promised improvements for the collector and access to their products. During that time, the collecting public held their collective breaths hoping that they will get it right. After failing to show progress, collectors are not optimistic.

Even if they fix the ordering and distribution systems for the upcoming product, it will take a long time for the U.S. Mint to gain the trust of collectors.

The association says the suspension of the program has been a burden to scrap recyclers across the country. The Washington-based Institute of Scrap Recycling Industries (ISRI) is urging the U.S. government to reinstate its mutilated coin redemption program, which was suspended in 2019.

→ Read more at recyclingtoday.com
Rare Greek Medal from 1896 Olympics Expected to Fetch about $75,000 in Auction

When the first modern Olympics were held in Athens in 1896, winners did not get gold medals as they will later this month when the Tokyo games get underway. Instead, they got silver, while runners-up got bronze. There were no medals for third place.

A rainstorm in London has led to the discovery of a hoard of more than 300 coins dated to the first century B.C.

A German federal court on Tuesday rejected the appeal of two defendants who had been jailed for stealing a massive gold coin from Berlin's Bode Museum. The court in the city of Leipzig concluded that there were no "legal errors to the disadvantage of the defendants" in their February 2020 sentencing and, as such, their prison terms were found to be legally binding.

A Viking era "piggybank" of silver coins has been discovered on the Isle of Man by a metal detectorist who made another startling discovery last year.

THE Bangko Sentral ng Pilipinas (BSP) issued a new warning to the public about the supposed "Brilliant Uncirculated 20-Piso" coin being sold online.